It’s no surprise when you look inside. The Aero 17 HDR XB revolves around a new Intel 10th Gen Core i7 CPU, and it’s joined by an Nvidia GeForce RTX 2070 Super GPU, 16GB of memory and a 1TB SSD.

It’s a formidable specification. The Aero outpaced the MacBook in most benchmarks, and it has the power to handle tough content-creation, 4K video, rendering, encoding a whole host of other tasks. You’re only going to need more power if you want to run workstation-level apps.

The Aero has reasonable battery life – it lasted for just short of seven hours in a work test. If you’re careful with the battery you’ll get through most of your workday, and even if you push the components, you’ll make it to lunch.

However, battery life is less of a concern on this larger machine, and the Apple is far better here – it lasted for around eleven hours.

On the outside, the Aero looks smart thanks to its matte metal finish, and it has very good connectivity. The keyboard is soft and comfortable, and the Aero isn’t a bad thermal performer – fan noise remains modest.

It’s not perfect here. Its build quality, dimensions and weight all fall behind the MacBook Pro, which is slimmer, lighter and sturdier. The MacBook also has a better keyboard and its Touch Bar.

The Gigabyte Aero 17 offers tremendous computing power, a superb 4K screen and a good keyboard alongside superb connectivity. If you want a powerful, versatile machine for handling virtually any work task, it’s worth the relatively high price.

Bear in mind, though, that the competing Apple MacBook 17 is slimmer and lighter, with better battery life and a superior keyboard – and that some people will be better served by a machine that uses OS X.

The Gigabyte Aero 17 HDR XB we’ve reviewed is expensive – it’ll set you back $2,899 (£2,700, around AU$4,600). This model actually sits right in the middle of the new Aero range, with pricier options available for creatives who need more power.

Gigabyte’s device squares up against the Apple MacBook Pro 16. That device takes aim at creatives, just like the Aero, but its specification options aren’t as impressive. 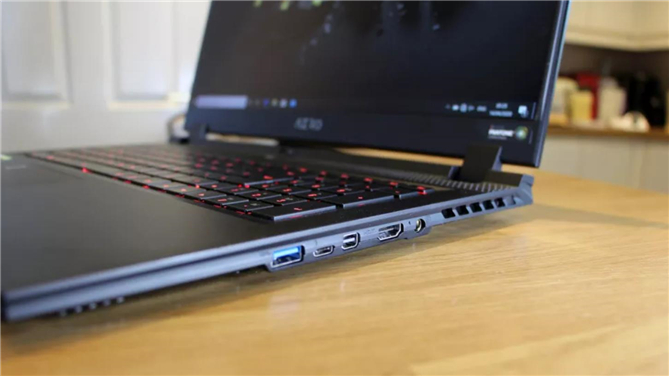 The Aero is made from dark, matte aluminium, with smart grilles and air vents and no extra ornamentation. It looks smart and professional. 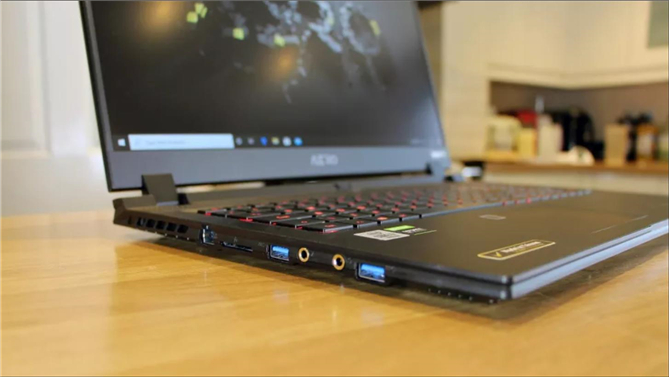 It’s got good practical touches, too. It has three full-size USB 3.2 ports and a Thunderbolt 3/USB Type-C connector.

There are HDMI and mini-DisplayPort outputs, two audio jacks and a card reader. 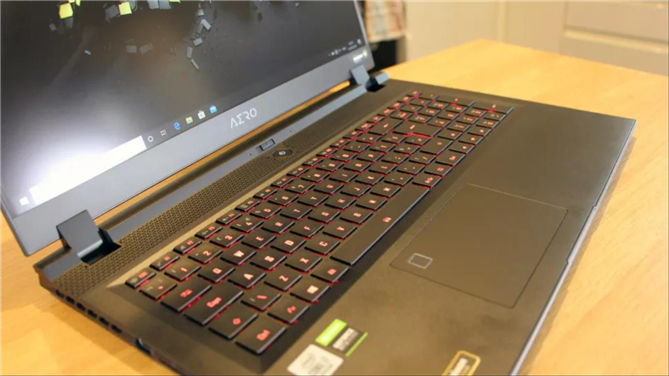 The webcam has a physical cover to aid privacy, and the trackpad has a fingerprint reader.

The Aero’s keyboard is impressively practical. It’s got a numberpad, loads of function row options, and keys that are consistent, comfortable and quiet. It’s easy to type for hours here, although some people will prefer snappier, crisper buttons. It’s paired with a smooth, accurate trackpad with crisp buttons.

These practical touches are undermined in other departments. Build quality is middling – the Aero’s metal body moves too much. The visible seams and occasional sharp edges are irritating.

The MacBook is sturdier, too, with a more tactile keyboard and the Touch Bar – although it doesn’t have a numberpad and its external connectivity isn’t as good. 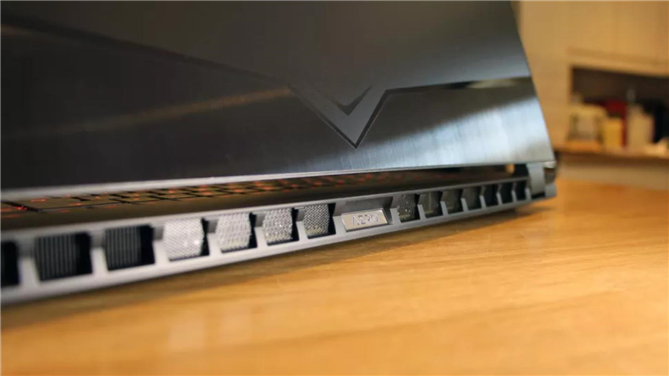 The Nvidia GeForce RTX 2070 Super has 2,560 stream processors and 8GB of dedicated memory. Elsewhere, the Aero is rounded out by 16GB of memory and a 1TB SSD. Connectivity is superb: the Aero has WiFi 6 alongside Gigabit Ethernet.

The Aero’s Cinebench result of 3,472 points outpaced the MacBook – and that machine had a high-end Core i9 CPU from Intel’s preceding generation.

The Aero was faster than the MacBook in three of the four Geekbench tests, and it was bolstered by cracking SSD read and write speeds of 3,513MB/s and 2,987MB/s.

The new CPU and the RTX 2070 Super GPU helped the Aero to a Cinebench graphics score of 130.56fps – almost ten frames more than the MacBook.

These results are no surprise. Intel’s new Core i7 chip beats the Apple’s older Core i9 part when it comes to specification – it’s got the same core count with better speeds and a newer architecture. The Aero’s Nvidia GPU has twice as much memory and 1,000 more stream processors than the AMD chip inside the Apple notebook.

This huge power means the Aero will handle virtually any work task. It’ll swat aside photo-editing and 4K video. Encoding and rendering are possible, and the Gigabyte will handle database and CAD applications too.

The Aero is faster than the MacBook, and you’re only going to need more power if you want to run workstation-level software.

Internal temperatures were fine and the Gigabyte never became too. The underside and the area above the keyboard became hot, but that’s not a big problem – this laptop will largely stay rooted to a desk.

The exceptional performance is paired with an excellent display. The 17.3in size and 4K resolution mean there’s huge space to work – and the 255ppi density level makes it crisper than the 226ppi MacBook.

The Aero’s Delta E of 1.47 means accurate colours, and the panel handled 99% of the sRGB and Adobe RGB gamuts – so you can comfortably work in both colour spaces.

The brightness level of 541cd/m2 is huge, and the black level of 0.39cd/m2 is good. They create a solid contrast ratio of 1,387:1 – easily high enough to deliver great depth and punch.

The Aero’s display is fantastic for work: bold, crisp and accurate, with loads of space. It’s only mediocre in other scenarios, though – its underwhelming DisplayHDR 400 certification means HDR content only gets a minor boost here, with the MacBook better for working in the DCI-P3 gamut thanks to broader gamut representation and better contrast.

The screen’s 60Hz refresh rate means it’s not suitable for fast-paced games and animation. It’s also not a touch panel.

The speakers are only mediocre, too. They’re loud and have decent high-end clarity, but there’s hardly any bass and they’re a bit tinny. The MacBook is far better here.

The Aero doesn’t have bad battery life at all. In our video test – which loops a 1080p video at 50% screen brightness – the Gigabyte lasted for six hours and 17 minutes. In a work benchmark with the screen at 50% brightness, it ran out of juice just one minute short of seven hours.

That’s enough longevity to handle most of a work day. If you ramp the screen brightness up and push the components harder, the Aero will still survive until lunchtime. Battery life is also less of a concern on this machine – the Aero is heavy and large and will often be used at a desk, where it’s able to be connected to the mains.

If you do need better battery life, though, the MacBook is a good option – it lasted 11 hours and 41 minutes in the video-looping test, and will easily handle a whole day away from its charger.

You’re searching for a laptop with enormous computing power
The combination of an Intel 10th Gen CPU, Nvidia RTX Super graphics and a fast SSD deliver exceptional work performance. The Aero will handle virtually anything short of proper workstation software, and it’s better than the MacBook Pro here.

You need a notebook with a large, crisp 4K panel
The Aero’s 17.3in 4K display has fantastic colours, punchy contrast and crisp detail – it’s great for precise work or using multiple applications. It’s very uniformity, too, and has X-Rite Pantone certification. Apple’s display is smaller and not as sharp.

You want versatile, fast connectivity
On the outside, the Aero has great USB options, HDMI and DisplayPort, a card reader and two audio jacks – it’s very versatile. On the inside, it’s got super-fast WiFi 6 and beefed-up Ethernet. It’s better here than the MacBook.

You won’t make use of the huge CPU power on offer – or if you’re an OS X fan
There’s no point buying this much power if you run modest work tasks – it’d be a waste. Also bear in mind the software you need to use – the Aero uses Windows, while many creatives will need Apple OS X to get the job done.

You need a laptop that’s slim, light and long-lasting
The Aero isn’t bad when it comes to its size, strength and keyboard, but the MacBook Pro is slimmer, lighter and stronger, with a better keyboard and its TouchBar – and better battery life.

You’re looking for a screen for HDR, touch or high-refresh rate functionality
The Aero has a great 4K screen, but it’s not as good as the MacBook when it comes to working in HDR colour spaces. The Aero’s panel isn’t touch, either, and it only has a mediocre 60Hz refresh rate.