If the Dell XPS 17 (2022) looks familiar, that’s because it is. Physically, this revised 2022 model is a dead ringer for last year’s XPS – and the one from 2020, too. But that’s no bad thing given this is one of, if not the slickest and sleekest laptops around.

What’s new can be found inside, most notably Intel’s latest 12 Gen CPUs. Our review unit is rocking the Intel Core i7-12700H, which packs six performance cores plus eight efficiency cores and turbos up to 4.7GHz.

Honestly, it ought to be enough CPU for even the most demanding users, making it one of the best laptops around for productivity and business users. But if you really insist you can pay extra – and an awful lot extra because the upgrade typically forces more expensive components in other areas – for Dell to stick in a Core i9-12900K, which has the same core count but peaks at 5GHz. We wouldn’t bother, since you’ll barely feel the difference, if at all.

Elsewhere, one thing the XPS isn’t is an out-and-out gaming laptop. Our configuration runs an Nvidia GeForce RTX 3050 GPU with 4GB of graphics memory. It’s dandy for a spot of casual gaming and will also add some welcome grunt to GPU-accelerated productivity and content creation apps. But it’s not a 4K powerhouse, nor is the RTX 3060 chip offered as an upgrade, which it ideally would need to be given the specification of the XPS’s screen.

Indeed, we’ve got the optional upgrade panel which packs 3,840 by 2,400 pixels – more than standard 4K thanks to the taller 16:10 aspect ratio. It’s a stunner of a screen rated at a punchy 500 nits and with 100 percent coverage of the Adobe RGB gamut, so it’s fully capable of content creation workflows. It also supports HDR, but isn’t a new-fangled mini-LED panel, so keep expectations in check. The HDR experience is OK rather than eye-popping.

The screen looks all the better thanks to those signature Dell XPS slim bezels on all four sides. It’s a design feature that keeps this two-year-old design looking bang up to date, and also minimizes the laptop’s overall footprint. It’s not just the screen that stands out, so does the sound quality. The XPS 17 really packs an audio punch, with remarkably dynamic sound including decent bass, good stereo separation and strong volume.

Rounding out the best bits of this revised 2022 model of the Dell XPS 17 is battery life of over 10 hours during light workloads, which is outstanding for this big a beast. On the other end of things, this isn’t anywhere close to being as portable as the best Ultrabooks, but no 17-inch laptop will ever score very highly in that regard.

But if you do take it with, you can genuinely get a day’s work done away from the mains, which makes it one of the best student laptops for students about to head off to uni in a couple of months.

So whether you’re a student, a content creator, or just want a gorgeous device, the Dell XPS 17 (2022) retains its place as possibly the best Dell laptop ever made that’s not called the XPS 13. 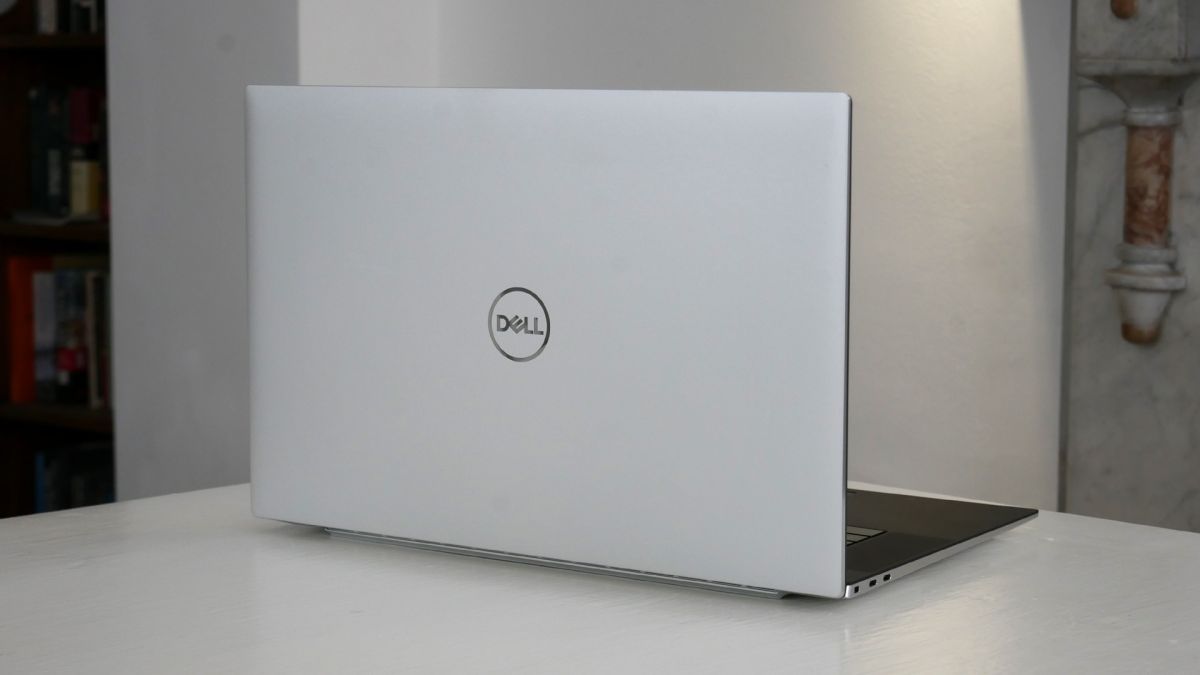 The design of the Dell XPS 17 (2022) is a dead ringer for last year’s model and the year before, but we’re grateful for that.

The XPS is super sleek and beautifully built, with the main chassis and screen cover in machined aluminum and the palmrest in carbon fiber. It still looks modern too, thanks to ultra-slim bezels on all four sides of the display. And that despite still squeezing in a 720p webcam up top with Windows Hello facial recognition support.

The chassis is very solid and the keyboard bed fairly stable, though a little flex is present. The large trackpad is about as good as it gets on a Windows laptop. Only Apple’s MacBooks do trackpads better. 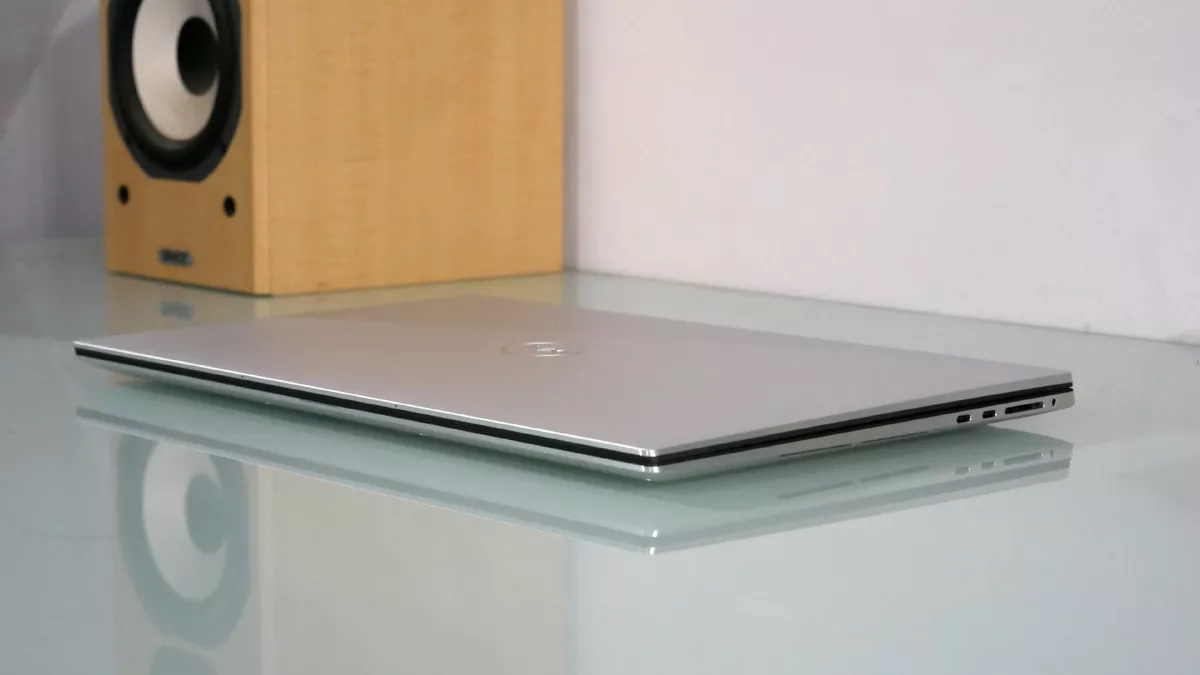 Of course, this is still a big machine weighing in at well over 2kg and measuring in excess of 14 inches across, but that’s the case with all of the best 17-inch laptops; they’re simply never going to be compact. That said, the slim bezels ensure about as small a footprint as possible and ensures that if you’ve got to have something this large you at least get the absolute most out of its size.

The XPS 17 is about as haulable as 17-inch laptops get, with the possible exception of the featherweight LG Gram 17, which is slightly wider in terms of footprint but much lighter at 1.35kg.

If we do take issue with the XPS’s proportions, it’s how they map to the port selection. On the one hand, the quartet of USB-C ports all support full Thunderbolt 4 functionality with power delivery and DisplayPort alt mode, which is great.

There’s also a full-sized SD card slot and an audio jack. But that’s it. There’s no USB Type-A, no full sized HDMI socket nor a LAN port, but that’s the price you pay for the slick looks and chiselled chassis sides.

With six performance cores and eight efficiency cores, the XPS 17’s Intel Core i7-12700H has as many cores as the top Core i9 processor from Intel’s latest 12th Gen Alder Lake CPU family. It just runs at slightly lower clockspeeds, but not that you’d notice.

As CPU performance goes, this laptop has everything you could ask for. It’ll tear through everything from video encodes to 3D renders with ease. Alder Lake’s world-beating single-core performance also guarantees that this laptop feels snappy in day-to-day tasks like web browsing.

Indeed, with fully 32GB RAM, you’re rarely going to run out of memory, which makes multi-tasking a breeze. With that much RAM, swapping application data to the SSD will hardly ever happen. Even if it does, there’s a fast PCIe Gen 4.0 SSD ready to minimise the performance hit of disk swapping. Overall, it really is a very speedy machine, this XPS 17.

Here is how the Dell XPS 17 (2022)performed in our suite of benchmark tests:

If there is an exception, it involves graphics performance and gaming. As tested, our review unit runs Nvidia’s GeForce RTYX 3050 mobile GPU with 4GB of video memory. It is a big step up over plain old integrated graphics, to be sure. As our benchmarks show, you can get playable frame rates at 1080p in modern games. But only just. It’s not a truly high performance gaming GPU.

You can optionally go for the RTX 3060, which will improve your frame rates. But even that GPU isn’t nearly powerful enough to play games at the XPS’s native 4K-plus screen resolution. Even Nvidia’s fastest mobile GPU, the RTX 3080 Ti, is only just capable of that.

Anyway, the point is that the XPS is certainly up for some casual gaming. But if gaming is one of your top priorities and you can afford this class of laptop, we’d recommend going with one of the best gaming laptops instead with at least an RTX 3070 GPU, something which is certainly available at this price point.

Large powerful laptops like the Dell XPS 17 (2022) used to be nailed-on certainties for awful battery life. Not these days. In light workloads like watching video and web browsing, you can expect over 10 hours of battery life. That’s true all-day performance.

Admittedly, if you do anything remotely demanding, that number will tumble dramatically, despite its ginormous 97WHr battery. But this certainly isn’t one of those old-school desktop replacement rigs that had you worrying about battery life the moment you unplugged from the outlet. This thing has legs. 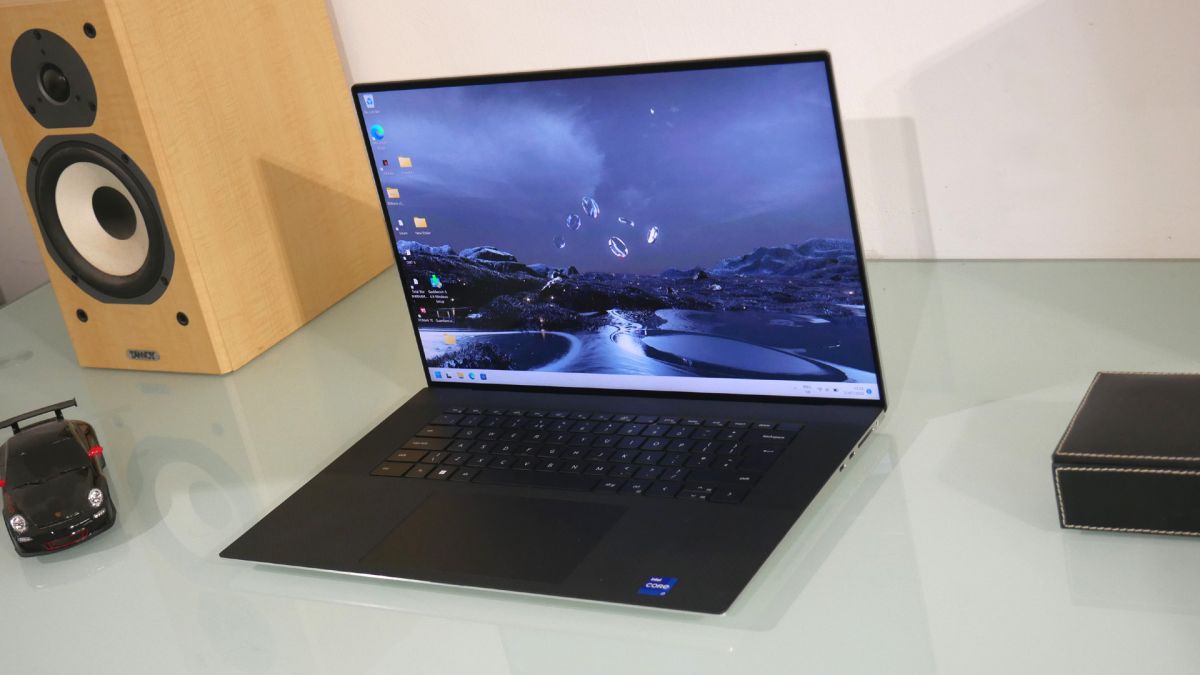 You love great design
The Dell XPS 17 (2022) is a gorgeous machine made out of high quality materials. The design may be a couple of years old, but with uber slim bezels it’s still bang up to date and very slick indeed.

You want the latest Intel chips
The XPS 17 has been updated for 2022 with Intel’s latest 12th Gen Alder Lake CPUs delivering outstanding performance thanks to a mix of performance and efficiency cores.

You need decent battery life
Despite the large 17-inch screen a beefy CPU performance, the Dell XPS 17 still delivers over 10 hours of battery life away from the mains making for impressive all-day longevity.

You want a true gaming laptop
The Dell XPS 17 can be had with Nvidia RTX 3050 or 3060 graphics which are decent for casual gaming. But serious gamers can get better performance at this price point.

You want maximum bang for your buck
The Dell XPS 17 is a great performer, but it will cost you. You can have similar performance, but with a less pleasing design, for a lot less cash. The slick looks and engineering add cost.

Portability is a priority
Inevitably, this 17-inch model isn’t the most portable laptop around. Weighing in well over 2kg and measuring over 14 inches across, this is not a laptop you’ll want to lug around daily.

LG Gram 17
If you insist on a 17-inch laptop but want to maximise portability, the featherweight LG Gram 17 might just be the answer. At just 1.35kg, it’s incredibly light for a large 17-inch laptop.

Razer Blade 17 (2022)
For years, the go-to performance 17-inch laptop for gamers and creatives alike has been the Blade 17. Beautifully engineered and super slim, it can be had with the fastest GPUs around.