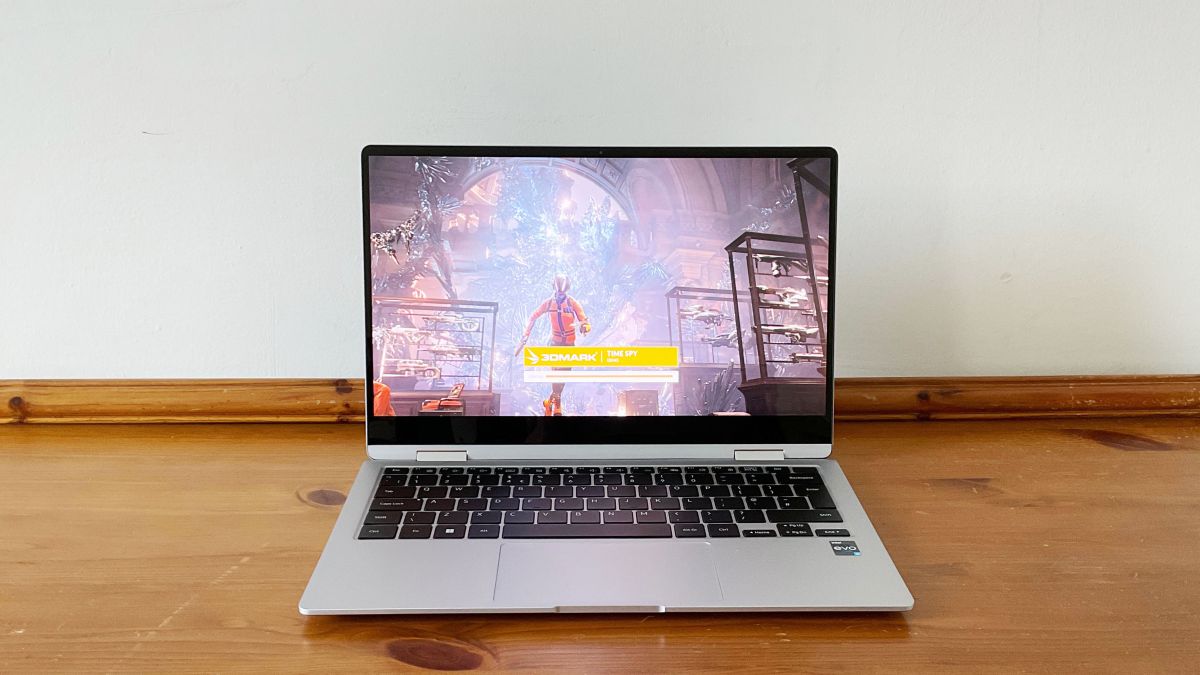 Samsung gets all the basics right with the Book2 360. Its convertible design works well in both laptop and tablet modes, yet still manages to be highly portable, with impressive battery life and eye-catching AMOLED display.

The Samsung Galaxy Book2 360 could be the best laptop Samsung has made. While Samsung’s smartphones have long been popular with many users, its Galaxy Book range of laptops is developing a pretty good reputation too, and shaping up as serious competition for the likes of Apple’s MacBooks and the Microsoft Surface range.

The latest addition to the Galaxy Book range is the second-generation Galaxy Book2 360, which is a really attractive convertible model that doubles up as either a laptop or tablet.

However, the most striking feature of the Book2 360 is its eye-catching AMOLED display. On paper, it might not sound particularly impressive, with the 13.3-inch display merely offering 1920 x 1080 resolution, but the AMOLED technology produces excellent image quality, with crisp, bright colors, and a level of clarity and detail that genuinely looks higher than its 1080p resolution would suggest.

Samsung doesn’t quote a figure for the brightness of the screen, but to the naked eye the display of the Galaxy Book2 360 can match more expensive rivals such as Apple’s 13.3-inch MacBook Air with its 2560 x 1600 display.

It’s no gaming rig, but the 12th gen Intel Core i5 processor in our review unit is more than adequate for routine web browsing or running office productivity software. Battery life is impressive too, and that eye-catching display will work a treat for presentations or just watching video at home, making the Galaxy Book2 360 a good all-round option for both home users and business users on a budget. 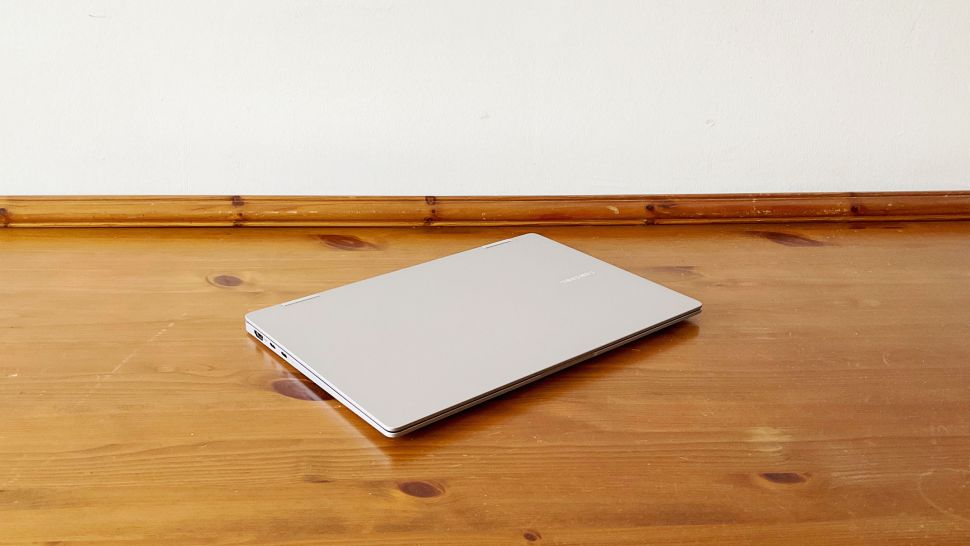 Here is the Samsung Galaxy Book2 360 configuration sent to TechRadar for review:

There are just two versions of the Samsung Galaxy Book2 360 currently available, with either an i5 or i7 processor. Prices start at $899.99/£849 for the model that we review here, which includes a 12th gen i5-1235U processor with top speed of 4.4GHz, along with 8GB memory, 256GB solid-state storage, and a touch-sensitive AMOLED screen with 1920×1080 resolution.

That’s similar to the 13.5-inch Surface Laptop 4, and slightly cheaper than the 13.3-inch MacBook Air – although neither of those models can match the versatile convertible design of the Book2 360.

The only other option currently available is to step up to an i7 processor with 16GB of memory and 512GB solid-state drive, which costs $1,099.99/£1,149. Samsung also offers a trade-in program that might save you some money if you have an old smartphone, tablet or laptop that you don’t need anymore. The Galaxy Book2 360 is available in the US and UK, but doesn’t seem to have reached Australia at the time of this review. 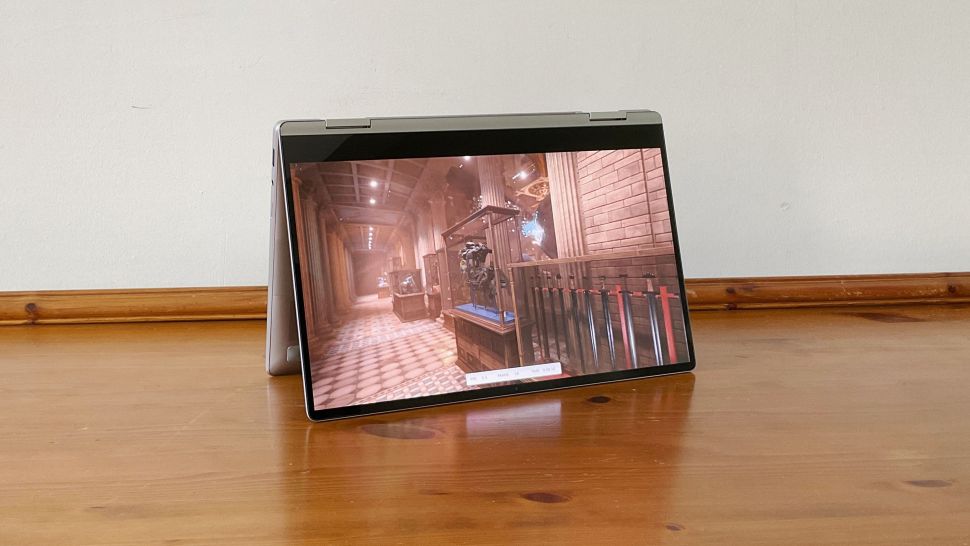 The Galaxy Book2 360 might not win any awards for original design, bearing a marked resemblance to the MacBook Air, with its 13.3-inch display, silvery gray casing and tapering profile.

But, of course, the Book2 360 is far more versatile, thanks to its touch-screen controls and convertible design that allows you to fold the screen right back and use it as a tablet. It’s even lighter than the MacBook Air too, weighing just 1.16kg, and measuring a mere 12.9mm thick, compared to 1.29kg and 16.1mm for the current version of the MacBook Air.

As mentioned, the AMOLED screen is a delight, despite its relatively modest 1,920 x 1,080 resolution, and it works a treat for watching video or doing a spot of photo-editing work. The Book2 360 is solidly built too, with a firm keyboard and large trackpad – although the individual keys don’t travel very well, and feel a little lifeless when typing at speed.

Many lightweight laptops have to compromise on connectivity to keep their weight down, but the Samsung Galaxy Book2 360 manages to provide one Thunderbolt 4 port, one USB-C and one USB-A (3.2), along with a microSD card slot, combo audio in/out, and even HDMI for connecting an external display.

There’s also Wi-Fi 6 and Bluetooth 5.1 for wireless connectivity too. Our only real complaint is that the 720p webcam isn’t great – producing a slightly grainy image that is easily washed out in bright daylight. 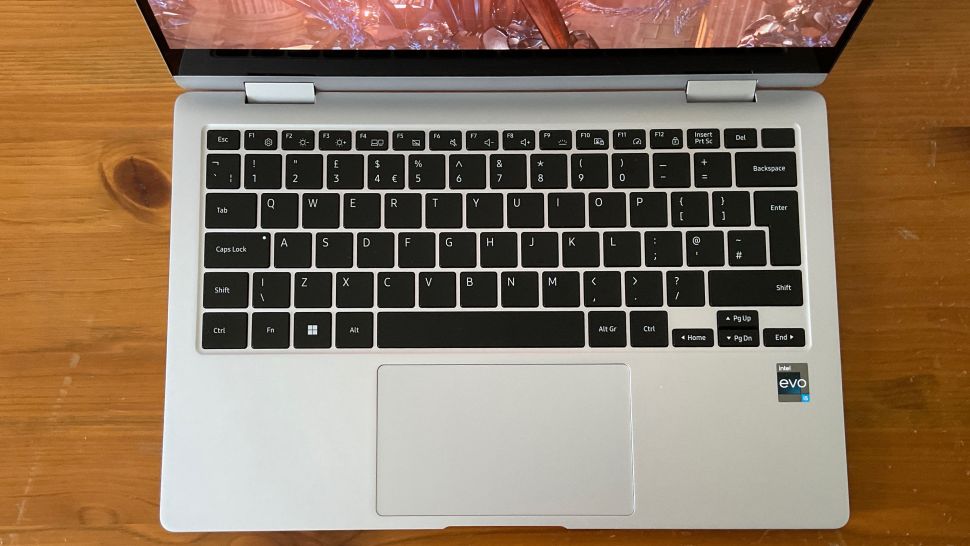 Here’s how the Samsung Galaxy Book2 360 performed in our suite of benchmark tests:

The Intel Core i5 processor that powers the Samsung Galaxy Book2 360 is a versatile 10-core chip, which includes eight power-efficient cores that can vary their clock speed from 1.3GHz to 3.3GHz as required, in order to preserve battery life as much as possible.

There are also two ‘performance’ cores that run at 4.4GHz in order to handle more demanding tasks. These produce a very respectable score of 7,100 for multi-core performance when running GeekBench 5, outgunning the Surface Laptop 4 (4,918) and only slightly behind the current version of the MacBook Air (7,583). Running the applications-based PCMark 10 test suite, the Book 2 scored 5022, putting it around the half-way mark in the overall PCMark results table – that’s pretty good going for a laptop costing well under $1000/£1000 – and providing all the power you need for web browsing and running productivity software such as Microsoft Office.

You might even be able to sneak in some casual gaming as well, thanks to the integrated Iris Xe graphics. Our 3DMark tests all produced scores that put the Samsung Galaxy Book2 360 in the ‘less than 30fps’ category, so it’s clearly not intended for high-speed action games. But, if you don’t mind tweaking the graphics settings down a bit, you should still be able to get playable speeds for more casual games that don’t require split-second response times. 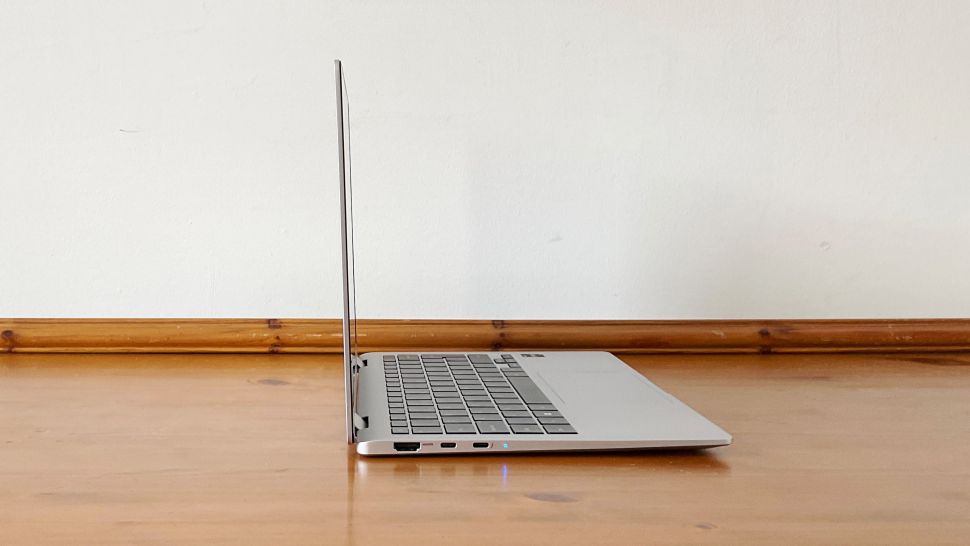 To top it all off, the Samsung Galaxy Book2 360 manages to provide good battery life as well. It wasn’t able to run the PCMark 10 battery test – due to a bug that we’ve encountered in PCM10 in the past – but when playing our movie test file it breezed past 11 hours, before finally shutting down at 11hrs and 10 minutes.

The MacBook Air and Surface Laptop 4 can match those scores, but they’re both more expensive than the Book2 360, confirming that Samsung has come up with an attractive convertible laptop that provides excellent value for money.

You want versatility
The convertible, lightweight design of the Samsung Galaxy Book2 360 lets you use it as a conventional laptop or as a tablet. Its attractive AMOLED display also works a treat for web browsing, playing video and other forms of entertainment.

You want portability
The Samsung Galaxy Book2 360 measures just 12.9mm thick and weighs 1.16kg, making it one of the most affordable ultra-portables currently available. It’s sturdily built too, so it can cope with life on the road.

You want all-day battery life
With more than 11 hours of battery life the Samsung Galaxy Book2 360 will last you all day long – and then some. There aren’t many laptops in this price range that can make that boast either, so the Book2 360 provides really good value for money.

You make a lot of Zoom calls
The 720p webcam in the Book2 360 boasts features such as auto-framing – that keeps you in the center of the image at all times – but the grainy image quality is disappointing, and it can’t handle harsh lighting very well

You’re a gamer
The integrated Iris Xe is fine for playing video, and maybe some casual gaming action, but series gamers will need a discrete GPU for high-speed gaming action.

MacBook Air (M1, 2020)
A new M2-powered model is coming out soon, but the current M1-based MacBook Air has a category-defining ultraportable design, with impressive battery life.

Microsoft Surface Laptop 4
With its comfortable keyboard, lightweight design and attractive high-res display, the Surface Laptop 4 is an excellent workhorse for remote working.

Samsung Galaxy Book Go
A bit of an experiment, running Windows On Arm on a Qualcomm chip, but the Book Go is highly affordable, and provides good battery life.