Our brief time with the MacBook Air (M2, 2022) convinces us that Apple could have another hit on its hands, with a slimmer, lighter design and a big boost in performance thanks to the new M2 chip.

Against all odds, we got a look at the brand-new MacBook Air (M2, 2022) just moments after it was officially unveiled at WWDC 2022.

Plenty of speculation has surrounded this powerful little laptop in recent weeks, from a potential host of color options to the chance that it might not make an appearance at the event due to manufacturing issues caused by Covid-19 lockdowns across China. We’re glad that Apple managed to pull through and deliver, but will the M2-powered MacBook Air be a worthy upgrade from its predecessor?

Luckily, TechRadar was at the in-person event — one of the first in years after pandemic-related lockdowns — and was able to spend a decent amount of time kicking the tires on the new laptop in order to create our first hands-on review of the atmospherically thin new Air.

The current MacBook Air (M1, 2020) is our pick for the best laptop you can buy right now, and from our brief time with the 2022 MacBook Air (powered by the freshly announced Apple M2 chip) there’s a very good chance Apple has another winner on its hands. 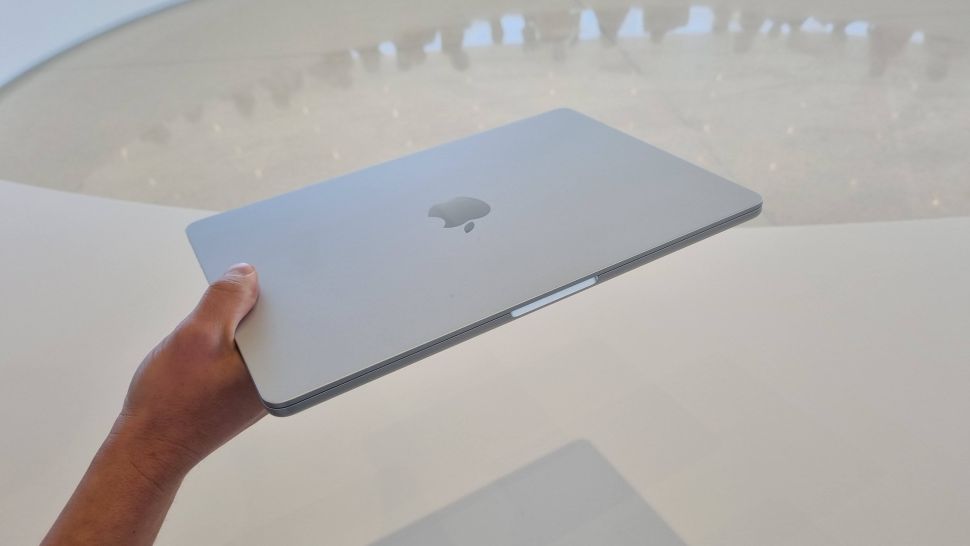 Apple has yet to announce a ship date for the new laptop, but preorders are now live as of June 6.

This leap in price is understandable, but it means it feels like poorer value than the older MacBook Air, which is a shame, as one of the best things about the 20202 MacBook Air was its low price and excellent performance. 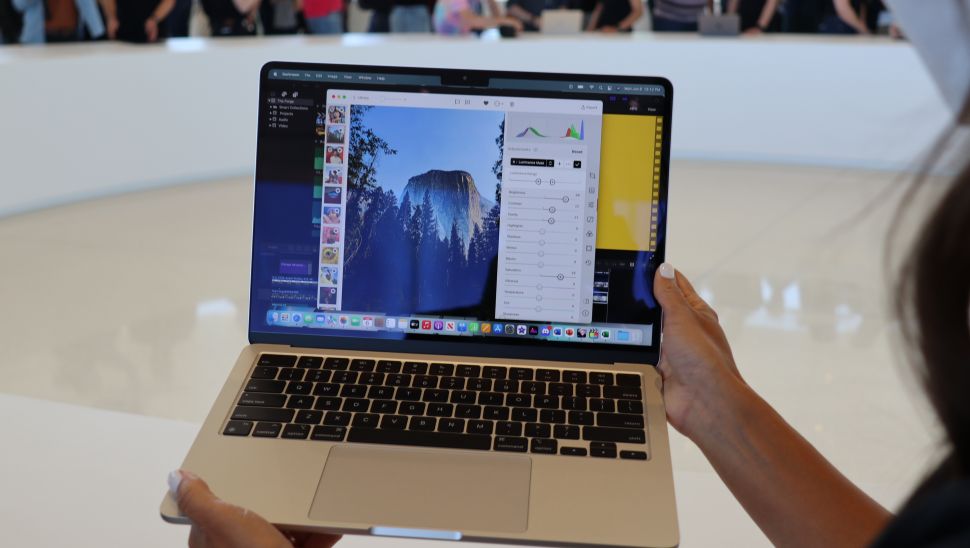 One of the most radical design overhauls we’ve seen Apple make to an iconic product has reinvigorated the new MacBook Air, and, while you may mourn the loss of the Air’s iconic wedge, it looks far more modern and elegant. As the name suggests, the MacBook Air is the thinnest and lightest MacBook Apple produces, and with the new MacBook Air 2022 model, Apple has made further improvements, shrinking the overall size and weight of the unibody design, while actually increasing the screen size.

The company’s engineers have managed this in part by slimming down the bezels that surround the screen by as much as 30% (top and bottom, 20% thinner on the sides). The chunky borders of previous MacBook Air screens were beginning to look rather outdated, especially when compared to high-end Windows rivals like the Dell XPS 13, so the thin bezels in the new model make this MacBook Air look much more modern. 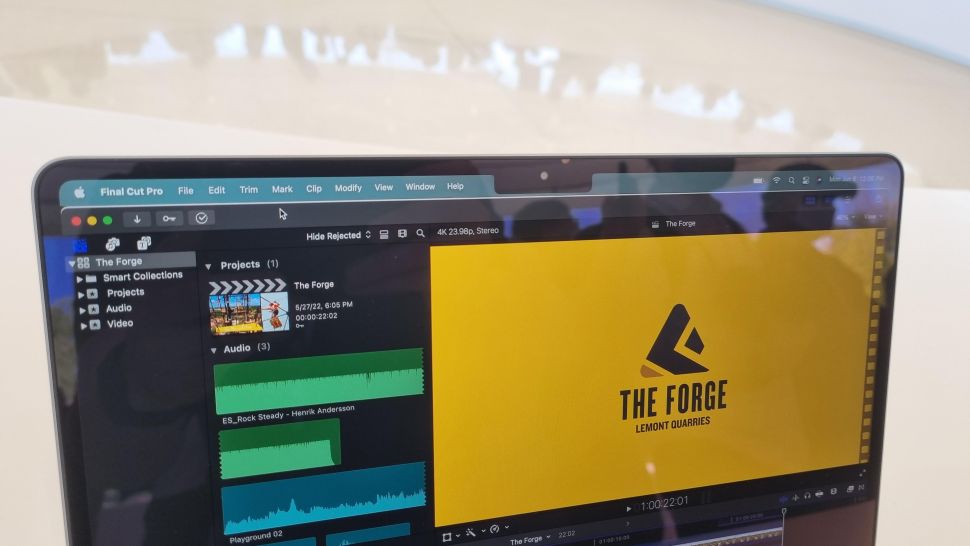 The Air’s webcam has been upped to 1080p, to match those found in the new MacBook Pros, and this boost in resolution (alongside improved image and low-light handling with the new M2 chip), will be welcome for anyone who relies on video conferencing or making video calls to friends and family. And in this age of hybrid working, that’s most of us.

Less welcome will be the news that the combination of a bigger webcam and thinner bezels means there’s a visible “notch” that surrounds the webcam and drops down into the menu bar. This is the same as the notch found in the MacBook Pro 14-inch (2021) and MacBook Pro 16-inch (2021), and when it debuted with those MacBooks, it proved divisive. 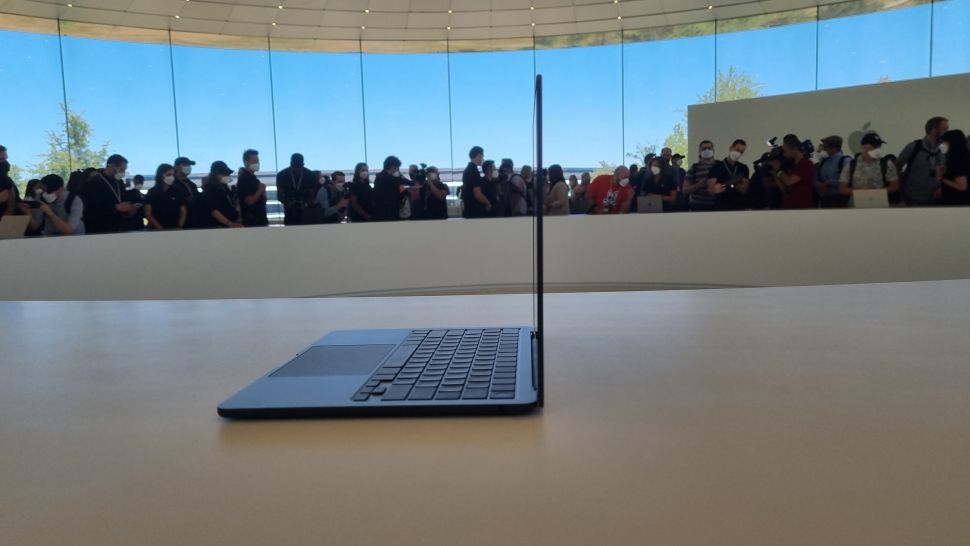 We didn’t mind the notch on those other systems, as Apple expanded the screen upwards, actually giving you more screen real estate, which made the trade-off worth it.

The new Liquid Retina screen is also brighter by 100nits, so it’s now 500nits, and also now supports one billion colors. From our time with the M2-powered 2022 MacBook Air, we could see an immediate improvement in the vibrancy of the screen. There’s no ProMotion support, however.

Another big design change is, as we noted earlier, that the MacBook Air is no longer a “wedge” shape with a thinner front and thicker back. Instead, it’s uniform, bringing it into alignment with virtually every other portable design Apple now produces.

We’re also getting new colors. People hoping for vibrant, pastel-like colors like the iMac 24-inch will be disappointed by the relatively low-key Space Gray, Silver, Starlight, and Midnight Blue colors. They do, though, look good in person. We saw all of them at Apple’s event, and our favorite by far was Midnight Blue. Each color comes with matching power cables – a supremely Apple touch.

Outside of the different shades available, the laptop features MagSafe (yes, it’s back) charging as well as two Thunderbolt ports and even a 3.5mm headphone jack. That legacy audio port makes sense when you consider the target market: education. Students still use a wide variety of wired headphones. The MacBook Air (M2) is also as slim and lightweight as we hoped for: just 11mm thick and weighing in at 2.7 pounds.

The standard base model MacBook Air will ship with a 30W charger, but you can opt to upgrade this to a 67W adapter for $59, which can get you to 80-percent battery capacity in just 20 minutes.

Instead of a pair of speaker grills, the new MacBook Air integrates two woofers and two tweeters between the keyboard and the display. In theory, that should make for a better sound experience but in the crowded space where we played with the laptop, it was hard to hear much of anything. It is, though a much cleaner look. 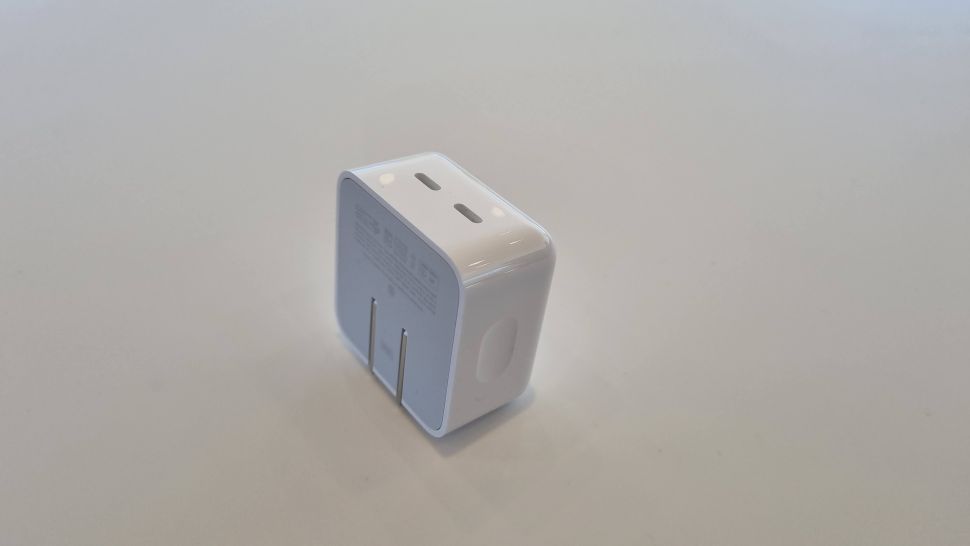 The previous version of the laptop came with the Apple M1 SoC or system on a chip, which combines CPU, GPU, and other components into an 8-core processor capable of surprisingly stunning performance. 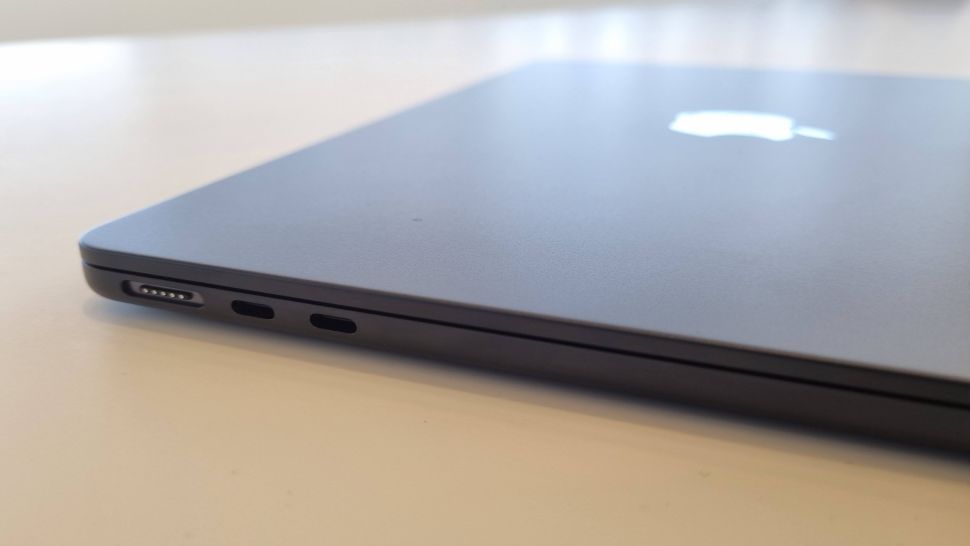 In our brief time with the MacBook Air, which was running macOS Montereysince the new macOS Ventura won’t launch until later this year, we found it to be fast and responsive, even with multiple apps open at once. We had a quick play in Final Cut Pro, editing a movie with multiple 4K sources, and it performed brilliantly — and was completely silent thanks to its lack of fans. The system can also support 8K h.264 video and, for the first time, ProRes format, though we couldn’t try any of that out.

We’ll give the MacBook Air (M2, 2022) a more thorough review soon, but our early hands-on time with it shows that Apple could have another hit on its hands.