The MSI GP76 Leopard rocks an aesthetic that feels like a throwback the gaming laptops seen in years gone by, where everything had unnecessary angles, was aggressively red and black and looked sturdy enough to survive being hit by a truck. It’s a little far gone from the sleek, professional look we’re seeing popularized in 2021, where you could easily mistake a powerful gaming device for a standard office laptop, but there will definitely be a demographic that still craves some nostalgia.

Thankfully, the GP76 Leopard does still have a lot of modern amenities, so you won’t be limited to playing games that came out in 2014, despite what the look of the laptop might suggest. Its equipped with a new GeForce RTX 3070 graphics card, as well as an Intel Core i7-10750H CPU. This in addition to the 16GB of RAM ensure this laptop can handle just about any game you throw at it on high graphical settings.

It’s a little hefty for our liking, weighing in at 6.4lbs (2.9kg), but it’s a little hard to expect a laptop of this size not be on the heavy side. It’s certainly portable enough to stick into a decently sized bag if you want to head over to a friend or relative’s house for some games, but we wouldn’t expect you to travel with it daily – your back might not be too happy with you.

Unfortunately, the bigger chassis hasn’t helped it keep its cool, with noisy fans and an unbearably hot underside occurring within minutes of playing demanding titles. We even found the thermals to be uncomfortably warm when watching movies, so this isn’t a device you’d want resting on your lap.

You do however get a glorious 17.3-inch, 144Hz display for speedy visuals, so any FPS games that need the additional edge will benefit, along with the usual Nvidia goodies like ray tracing and DLSS. Resizable BAR is also included for some game optimization to push performance where you need it.

In all, the GP76 Leopard is a powerful laptop, but the user experience really distracts from how impressively it performs. If you can see past the ‘retro’ design (and noise for that matter where the fans are concerned) then this is still a great choice for anyone in the market for a new GeForce RTX 3000 Laptop. 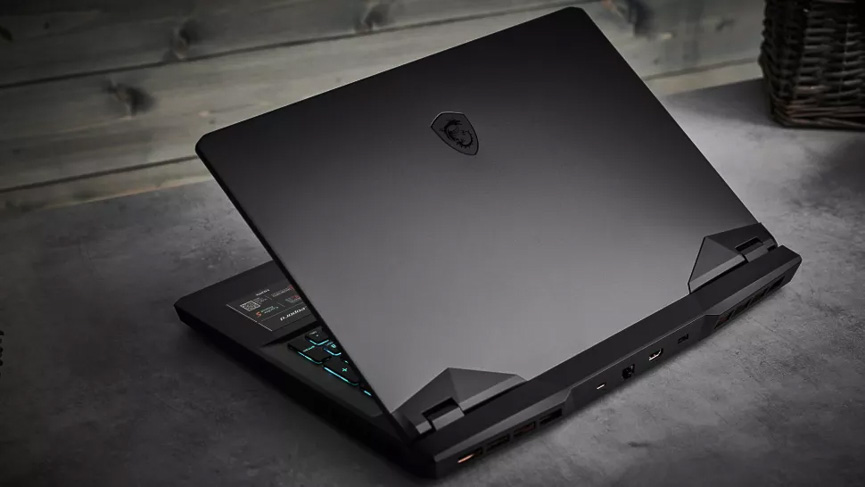 At the time of writing, we can’t find the laptop available to buy in the US, but we will update prices accordingly when it hits the shelves. We have however, found confirmed retail prices for the UK, EU and Australia so we have a fairly good idea of what to expect.

This is considerably more expensive than some other gaming laptops using the latest mobile Ampere cards, but that entirely depends on where your brand allegiances lay – for $1,999 (about £1,460, AU$2,630) you can buy another MSI offering, the GE76 Raider with an RTX 3070 with 32GB of RAM that looks (in our opinion) considerably better.

As previously stated, we’re not huge fans of the design but one person’s trash is another’s treasure – if you like the slightly dated retro throwback then this could actually be a breath of fresh air from all the latest releases that are desperately trying to look like edgy business laptops, such as the Lenovo Legion 7i.

It doesn’t just look rugged either, as the whole laptop chassis feels very well built. We couldn’t feel any flex in the keyboard base plate, and the display hinge is also suitable solid. We certainly don’t suggest testing how much abuse it could take, but if you need a gaming laptop that can survive a busy life then the GP76 Leopard feels up to the task.

The SteelSeries keyboard also contributes to how dated the laptop looks, with a bizarre choice of font being used that looks more at home on an energy drink. This isn’t the first time this keyboard font has made an appearance on MSI laptops and could be to your personal taste which is fine, but it feels like a bit of a risky choice. It also isn’t mechanical, so if you’re averse to the ‘tappy’ noises associated with gaming keyboards, this offers a quieter sound while still being responsive. 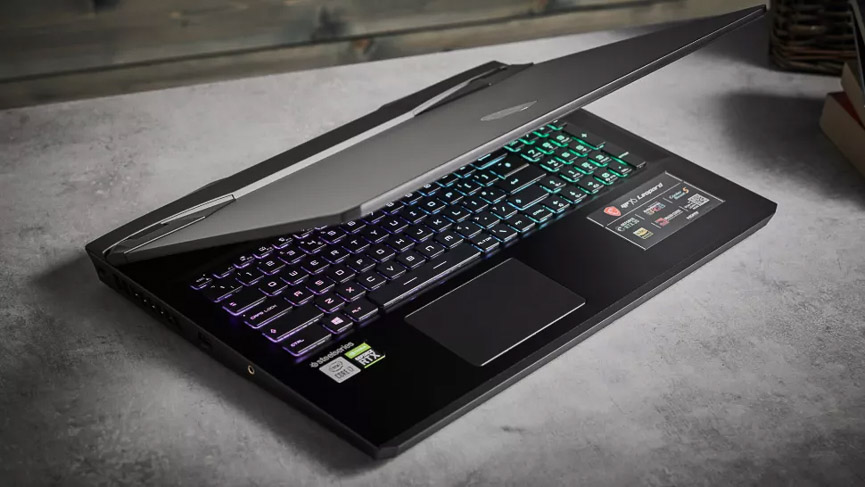 The built-in RGB lighting is very nice though, and each individual key can be customized for real-time response in games. There are a few different modes to choose from for light effects too, and it can be programmed to respond to music if you want to see the lights react to what you’re listening to.

The SteelSeries Engine 3 software that comes pre-installed is what you’ll be using to make lighting customizations, but it actually froze twice when trying to make customized lighting profiles. When we did get it working we didn’t run into any further issues, but the software is incredibly frustrating to use if you like to make frequent changes to your device. 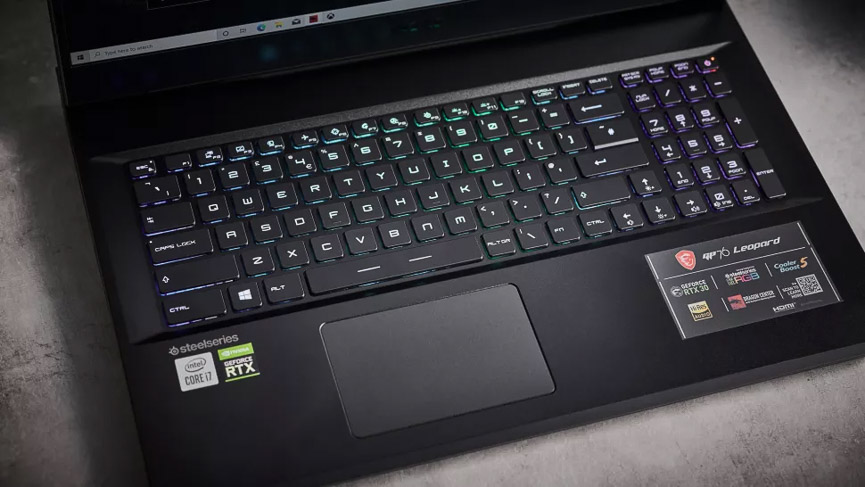 The touchpad is located slightly to the left of the device, but we didn’t find it was an issue when using the WASD keys, and it was actually fairly responsive. We would suggest using a mouse over the built-in touchpad any day, and It does feel small in comparison to the rest of the laptop but for slower game titles like Age of Empires it’ll do in a pinch.

The huge display is incredible, so you’d want to be playing more than just old RTS games on it. At 17.3-inches and 144Hz, this is a great choice for anyone in the esports scene who can benefit from the additional visuals and speed. You’re getting an average of 292 nits of brightness which is perfectly serviceable for most games at 1080p, though anything with ray tracing could feel a little lackluster. 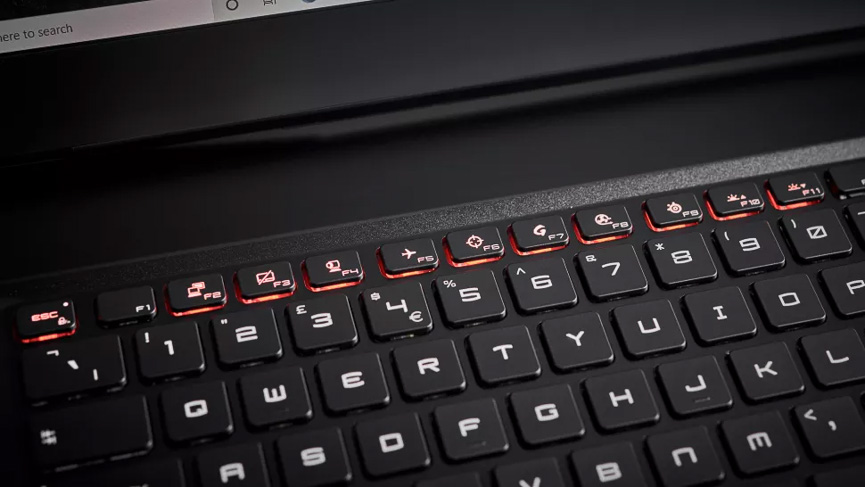 The GP76 is advertised as having good chunk of cooling technology to help with the thermals, such as ‘Cooler Boost 5’ and huge side and rear fans that help airflow to the GPU and CPU heat pipes. This is great in theory, but the noise created by this is deafening. Okay, that’s a little dramatic but its certainly one of the loudest gaming laptops we’ve used in some time, and no other RTX 3000 series gaming device we’ve tested seems to share the issue

Not only do the fans sounds like a small plane is taking off whenever you boot into just about anything on your Steam library, but they don’t actually seem to do a great job at keeping the system cool. The underside of the device heated quickly, and soon became too hot to keep on a lap. A separate laptop stand is likely required to aid in keeping the laptop cool, and we would suggest giving it as much clearance as possible.

Vents aren’t the only things located on the rear and sides, with the headphone jack and one USB-A 3.2 located on the left, two USB-A 3.2 ports on the right, and a USB-C, LAN, HDMI and power supply port all located on the back of the laptop. There’s certainly no shortage of ports, making this a great option for folk who like to plug in everything but the kitchen sink.

Given its packing an RTX 3070 and an Intel Core i7-10870H, the MSI GP76 Leopard is a beast of a gaming laptop that’ll play just about any game you throw at it maxed out. We’re using the GP76 to play a variety of titles at 1080p, such as Valorant in which we consistently see 200+ FPS, as well as some older favorites like The Witcher 3 which happily manage around 105 FPS.

In benchmarks, Metro Exodus manages a commendable 69 fps, not too shabby for such a demanding title. Any laptop with an RTX 3080 will fare higher, but the difference in-game would be negligible. Sadly, the Gigabyte Aorus 17G comes with a similar spec lineup (though with an additional 16GB of RAM) and annihilates the GP76 Leopard across the board for performance, and at $2,099 / £2,199 / AU$3,599 the Aorus is a more affordable option in some regions.

The GP76 Leopard will quite happily multitask some heavy workloads where needed: having Discord, a PC game Spotify, and a few Chrome tabs open won’t prove an issue, as long as you’re jacked into the aux. Regardless of what we played, the outrageously loud fans kicked in after just a few minutes so it would be better to game with a noise-canceling headset rather than the built-in speakers. 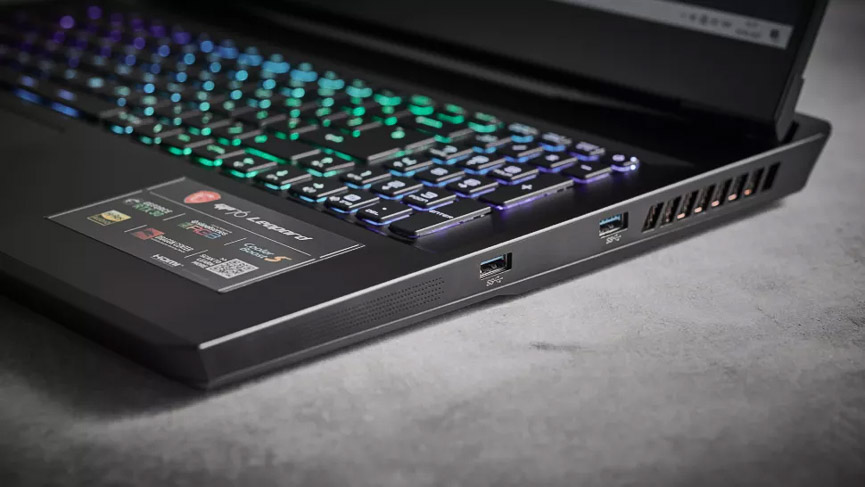 If you were looking for something for creative work, the GP76 is also a suitable choice, despite the design. The hardware is more than up to scratch to run most Adobe apps and other demanding software, so while a dedicated workstation may provide better results, this would be a good option if you’re stuck between choosing a gaming laptop or something more practical for rendering and 3D work.

The speakers on the GP76 Leopard are great when you can hear them, and better than expected for a gaming device. Bass is punchy and nothing falls flat. It’s not quite the quality of a Dell XPS 15, but if you’re the type who likes to blast music directly from that laptop while you cook or do chores then you’ll likely find this is up to standard. 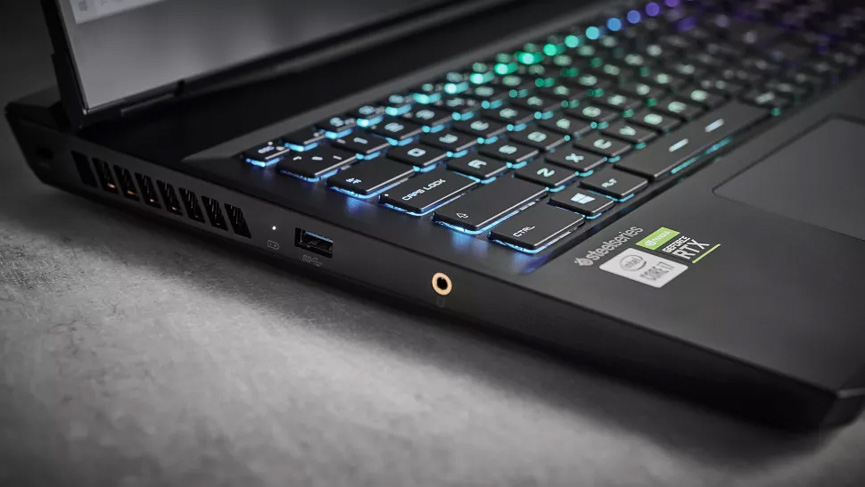 As with many gaming laptops, the battery life of the GP76 Leopard isn’t going to blow anyone away – the hardware in this beast is especially thirsty. Still, achieving 3 hours 42 minutes in the PC Mark 10 Battery test, this is on the lower end of average for devices in a similar price range.

Actual games manage less than this, with a rough average of 90 minutes across various single-player games. We aren’t crazy enough to play any online competitive games unplugged, but given a game of League of legends can easily hit the hour mark we wouldn’t advise it.

The laptop also managed around 2 hours 38 minutes in the movie test, so if you’re wanting to watch any movies during a train commute, or during a short-haul flight then this will serve nicely. The huge screen size is certainly a bonus to that too, but make sure you’re not resting it on your lap given our warnings about how hot the underside can get. 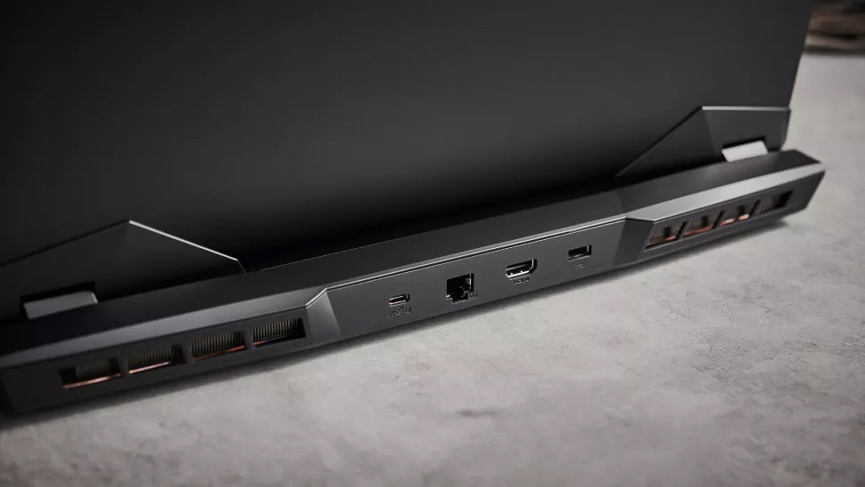 You like the classic look
There’s no denying the nostalgia of this style of laptop, something that the MSI GP76 Leopard definitely leans into with plenty of ‘angry gamer’ edges and RGB keyboard.

You want a large display
At 17.3-inches, this is a massive screen and able to show off your games and films at an impressive 144Hz.

You need something sturdy for on the go
This is a very well built laptop, with barely any flex in the chassis or keyboard baseplate. We don’t condone testing out how rugged it could be, but this appears to be able to take a beating if required. 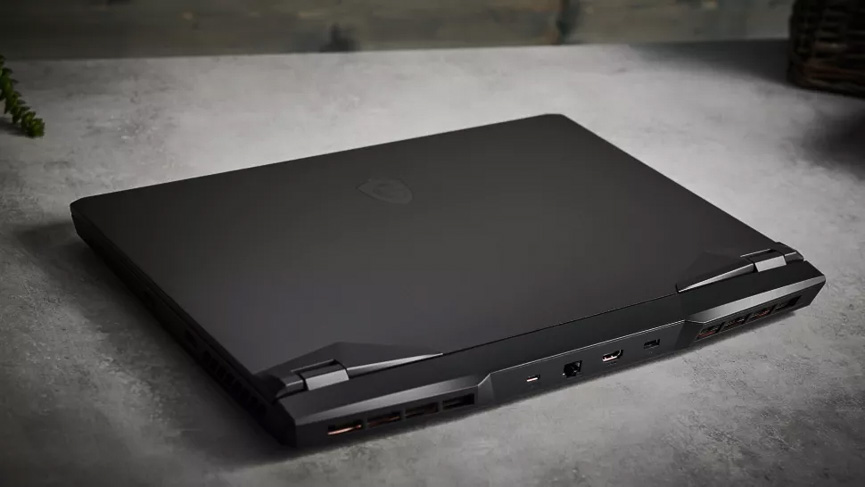 You want something for work and gaming
The looks alone don’t make this a great choice for professionals who want to buy a single laptop for the office and some gaming, but there are many better options available for anyone needling something a bit more streamline.

You want something lightweight
This is a chonky machine, so we would steer clear if you’ll be carrying it around day in, day out.

You want to game/watch media away from a desk
The GP76 Leopard gets very hot while running, so unless please don’t sit with it on your lap. We would suggest buying a dedicated laptop cooling stand to help with thermals.