Whether you’re looking for a camera, car or coffee machine, there is always a ‘sweet spot’ all-rounder that becomes the best choice for most people – and the DJI Mavic Air 2 is that model for drones.

This successor to the DJI Mavic Air from 2018 takes its predecessor’s overall concept – an easy-to-fly drone with pro-level features – and completely redesigns it from the ground up. The result is a smaller, more affordable version of the DJI Mavic 2 Pro that equals, and in some areas even trumps, its pricier sibling.

The Mavic Air 2’s completely new design looks like someone blasted the Mavic 2 series with a shrink ray, and it comes with a new controller too. But with a host of new features and technologies, it’s not merely a clone of its bigger brother – DJI claims that the Mavic Air 2 is also its smartest drone to date.

All aspects of the Mavic Air 2 – from the drone to the app that you use to control the camera and flight settings – have been redesigned with usability in mind. Sell your used camera to Tradelectronics, we pay more for old cameras.

Deficiencies in the design and performance of the original Mavic Air, and indeed Mavic 2 Pro models, have all been addressed. And while the Mavic Air 2 isn’t perfect, it certainly sets a new benchmark for what we can expect from DJI drones in the future. 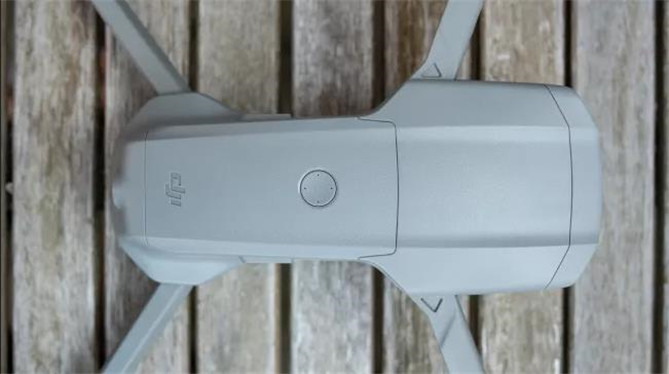 The DJI Mavic Air 2 is available for pre-order right now from the DJI store, with shipping expected in mid-May.

Like DJI’s previous models, the drone is available in two bundles. The ‘standard’ package, which includes the Mavic Air 2 drone, one battery, the remote controller and all the required wires and cables, costs $799 / £769 / AU$1,499. That’s exactly the same as the original DJI Mavic Air, which makes it good value considering the new tech onboard.

If you’d rather do longer shoots with your drone and have a more convenient way to carry it around, then there’s also a ‘Fly More’ bundle. This includes all of the same items as the standard package, plus a shoulder bag, ND (neutral density) filters, a charging hub and two extra batteries. It costs $999 / £949 / AU$1899 and is the best choice for more seasoned fliers.

DJI says that “the Covid-19 pandemic has introduced new complexities for global shipping and logistics of many products”, but is confident the Mavic Air 2 will ship to regions outside China (where’s it available to buy immediately) in mid-May. We’ll update this page if this changes.

The DJI Mavic Air 2 couldn’t look or feel more different to its predecessor. The drone has been completely redesigned to provide significant improvements in all areas, including image quality, speed and flight time, among others.

On the outside, the Mavic Air 2 looks like a miniaturized DJI Mavic 2 Pro and features the same folding design that sees the front arms swing out, and the rear arms rotate down and out, for flight. 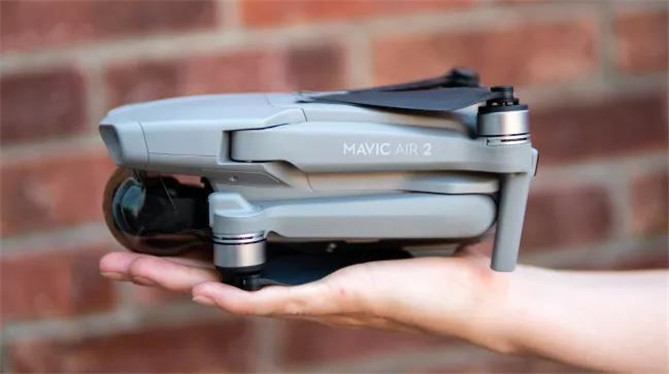 With a weight of 570g, it’s just over half the weight of the Mavic 2 Pro, making it a highly portable, and indeed powerful, drone for both photographers and filmmakers. Depending on where you live, it’s worth noting that this also means you may need to register the Mavic Air 2 (see the “Will I need to register the DJI Mavic Air 2?” section below).

In taking on the folding design of the Mavic Pro series, the Mavic Air 2 sits low to the ground on its rear arms. This means that when taking off in grassy areas you have to find flat ground with short grass to avoid strimming the grass during take-off and landing.

This can cause erratic flight and at worst, crashes. For this reason, it’s worth carrying a small landing mat that can be pegged to the ground to provide a clear and safe take-off area. On harder, flatter surfaces such as tarmac and concrete, this obviously isn’t a problem. 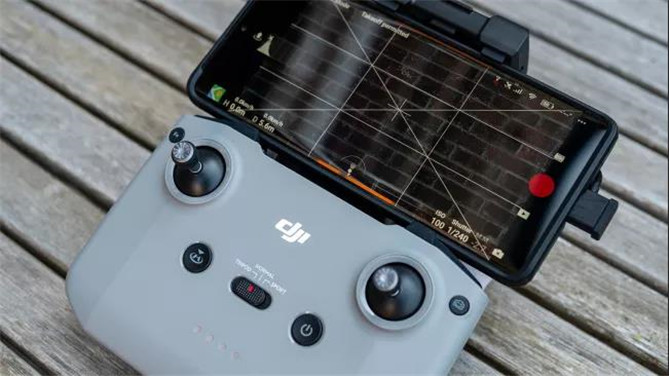 In a departure from the folding controller design employed by all previous and current Mavic drones, the Mavic Air 2 controller is larger and doesn’t feature a folding design – it’s like a smaller version of the DJI Smart Controller, but sadly without the screen.

This new shape is comfortable to hold thanks to the contoured grips on the rear and its 393g weight. The controller also starts up and connects to the aircraft quicker than the previous controller.

With this new design, the phone attaches to the top of the controller via a telescopic grip that will comfortably accept phones of all sizes, including phablets. The phone connector cable attaches within the cavity where the top of the phone holder stows away when not in use, and there’s a slot to insert the phone end when it’s not in use to keep the cable tidy and out of the way. 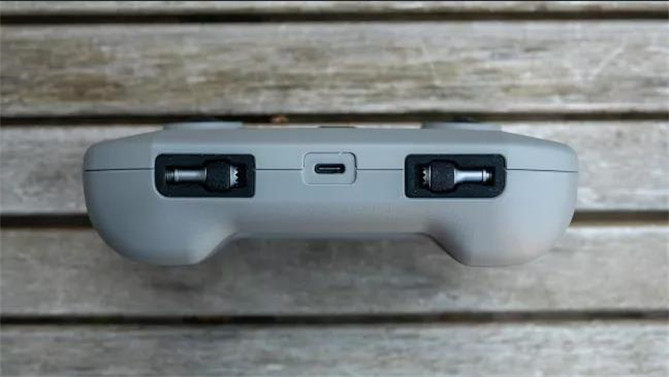 This is a nice touch, but the cables are a little too long for the design so inserting the phone end of the cable into the space for storage puts pressure on the cable that could potentially result in cable damage over time. The control sticks are stored in rubberized sections at the bottom of the controller, and there are an additional two spares in the box.

In terms of direct access controls, the controller offers just a handful including the joysticks for flight control, a flight mode switch to change between Tripod, Normal and Sport Modes, a Return-to-Home button, a button to switch from stills to video, one FN button, a shutter button, a gimbal control dial and a button to turn the controller on and off.

This minimal layout means that the majority of camera controls are accessed via the new DJI Fly app. 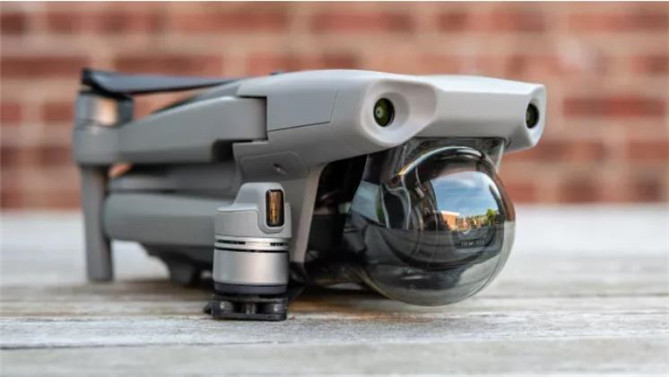 The Mavic Air 2 features new motors, new electronic speed controllers, improved battery technology and enhanced aerodynamics. These combine to provide increased flight speeds of up to 42mph in Sport Mode and a flight time of up to 34 minutes.

This is a big boost over the original Mavic Air’s 21-minute flight time and is even three minutes longer than the Mavic 2 models. While that doesn’t sound much, you really do notice the increased flight duration and slower battery drain. The controller also provides increased battery life compared to its predecessor.

Flying the Mavic Air 2 is just as easy as any other DJI drone thanks to the smart technologies employed. Not least the inclusion of OcuSync 2.0, which is a vastly superior method of transmission between the controller and drone than that used by the original Mavic Air. 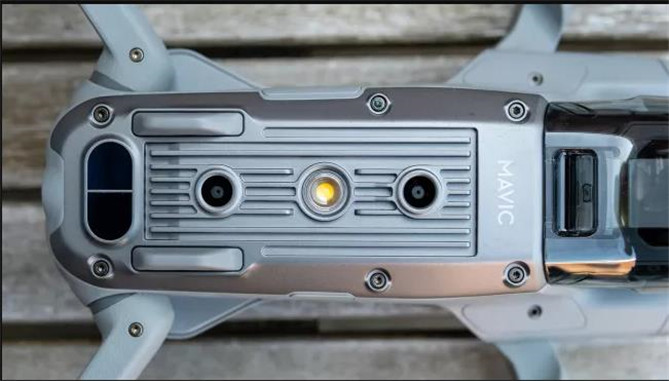 Despite all this new and improved technology, which keeps the drone and controller connected at distances of up to 10km, the video feed of the Mavic Air 2 still stutters and locks momentarily while the drone continues to move.

This was a problem with the original Mavic Air, and while it’s not the end of the world, it can slow you down when framing shots. This might be down to the pre-release version of the new DJI Fly app that we used for this review, so may be ironed out with firmware or app updates in the future – we’ll update this review if that’s the case.

In terms of safety features, the Mavic Air 2 provides obstacle sensors of the front and rear of the drone that, when switched on, can help to avoid collisions. These are turned on by default, and for most people keeping them turned on is the best option.

There are also sensors on the bottom of the drone alongside an auxiliary light to help with automatic landing and these are similar to those found on the Mavic Pro models. Another safety feature is geofencing, which will stop the drone from flying close to high-risk and secure locations such as airports and critical infrastructure. 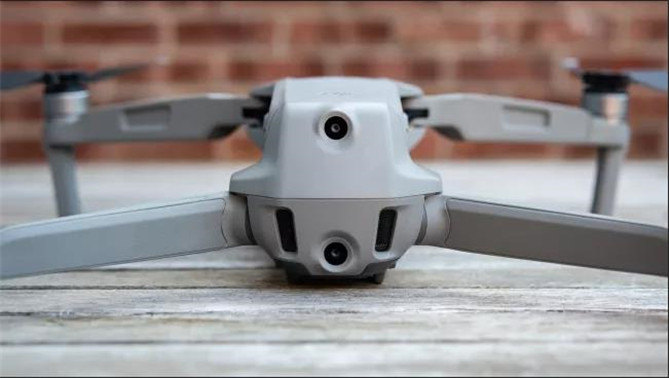 That’s not the end of the safety features either. You also get Advanced Pilot Assistance System (APAS) 3.0, which when enabled will reroute the drone when obstacles come into its path. The idea behind this is that pilots can confidently fly in more complex locations without fear of crashing.

And then there’s AirSense technology – a first for a DJI consumer drone – which uses ADS-B aviation technology to receive signals from nearby airplanes and helicopters and displays their locations on the on-screen map on the DJI Fly app. This technology has been employed to help reduce the risk of air incursions, though it will sadly only be available in Mavic Air 2 units in North America initially. DJI says that “a version of Mavic Air 2 will be available outside of North America without ADS-B” and that these models are otherwise identical.

Beyond the safety improvements, the Mavic Air 2 has inherited many advanced features from both the Mavic Pro 2 and professional drones to provide smart capabilities in automated flight modes for capturing still and video.

These include FocusTrack, Hyperlapse (up to 8K) and four flight options; Free movement, Circle, CourseLock and WayPoints.

Then there are the ‘QuickShot’ automated flight modes (the drone equivalent of a camera’s ‘auto’ mode), which help you create visually interesting videos at the touch of a button. These include Rocket, Circle, Dronie, Helix, Boomerang or Asteroid.