The Canon EOS R10 is surprisingly powerful camera for its size and price tag. With a Digic X processor, good handling and modern autofocus smarts, it could be an enjoyable second camera for existing Canon fans, or an affordable way into the EOS R system for new converts. Keen amateur snappers may find that its limitations pushes them towards the EOS R7, though.

You wait years for an affordable Canon RF-mount camera, and then two come along at once. The Canon EOS R10 is, like the Canon EOS R7 that was simultaneously, an APS-C mirrorless camera that brings modern smarts to a familiar sensor. But this time, the impressive list of features comes with an even more tempting price tag.

Canon says the EOS R10 is the evolution of its double-digit DSLRs like the Canon EOS 90D and 80D, cameras that became firm favorites among people who wanted to snap their family, vacations and day-to-day lives with smartphone-beating quality. The trouble is, smartphones have got a bit better since then, so what has the EOS R10 done to make itself relevant in an era when ‘entry-level’ cameras have become largely extinct? 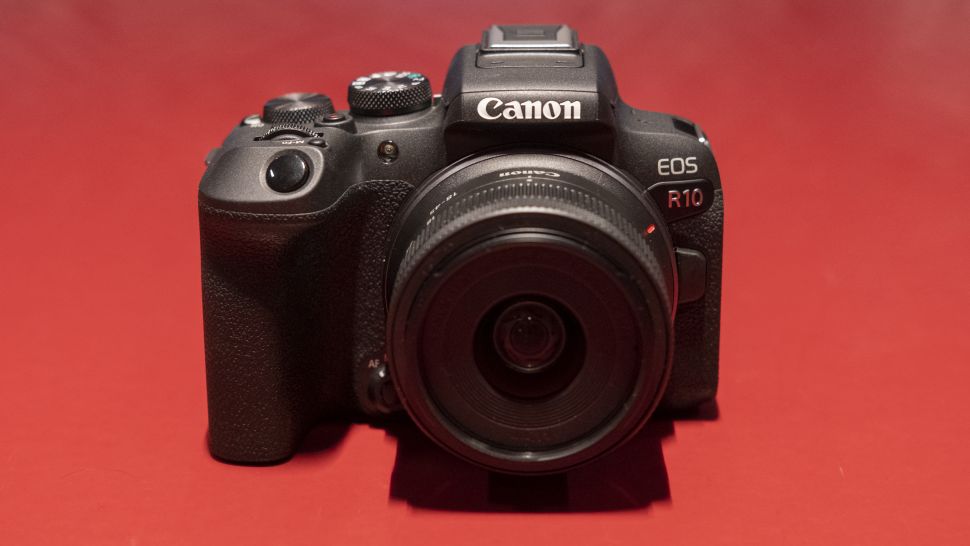 The 24.2MP camera’s most impressive tricks are unlocked by Canon’s Digic X processor, which blesses the EOS R10 with the latest autofocus tech and impressive burst-shooting speeds for its price tag. You get Dual Pixel CMOS AF II and 15fps continuous shooting (albeit with a firm brake applied by the EOS R10’s buffer), which make this camera ideal for snagging a shot of the family dog’s winning goal in the garden water polo.

But what limitations are hiding in the Canon EOS R10’s specs sheet? Is it as fun to shoot with as it sounds? And could it possibly break into our list of the best mirrorless cameras? We took one for a quick spin in London recently, and have gathered our early thoughts in this hands-on Canon EOS R10 review.

The Canon EOS R10 is available to pre-order ahead of its expected availability in July. It’s available in a few different bundles, with the cheapest being its body-only price of only $979 / £899 / AU$1,499. 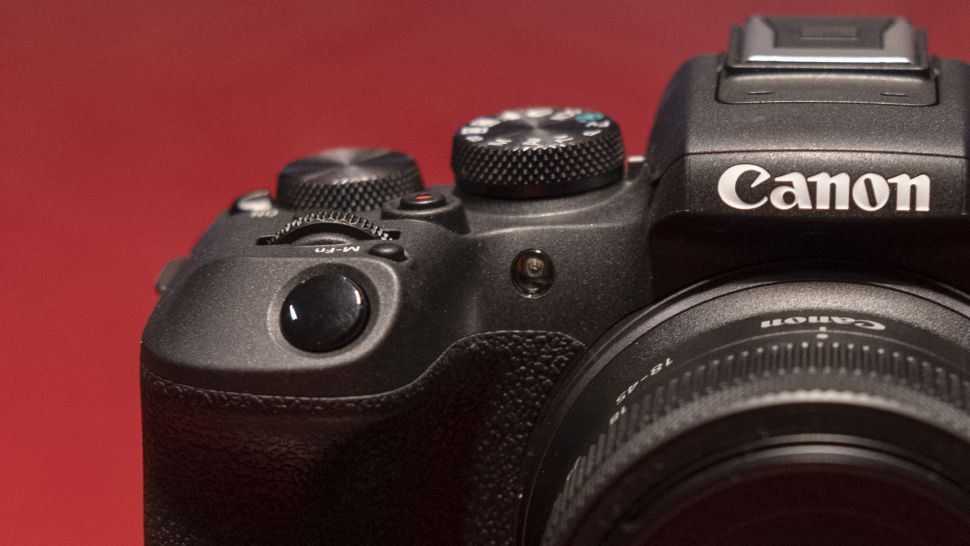 This is pretty aggressive pricing has echoes of the Canon EOS RP, a full-frame camera that landed for $1,299 / £1,399 (body-only) back in 2019. The EOS R10 isn’t a full-frame camera, of course, and lacks a lot of the features you’ll find on the EOS R7 (like in-body image stabilization).

But it is priced at a similar level to the Nikon Z50, another relatively compact APS-C camera that can’t, on paper, match the promise of the EOS R10.

The Canon EOS R10 probably isn’t going to win any Red Dot Design awards, but it does fulfill its brief of being both impressively small and comfortably familiar to anyone who’s used a Canon DSLR.

In your hand, the little thing is quite reminiscent of a Canon EOS Rebel SL3(otherwise known as the Canon EOS 250D, outside the US), which actually weighs 20g more than the 429g EOS R10.

Realistically, this is about as small as RF-mount cameras are likely to get – which is to say, not quite as diddy as EOS-M series like the Canon EOS M50 Mark II. Those cameras will live on, albeit looking wistfully through the garden fence as photographers play fetch with Canon’s new APS-C darlings, the R7 and R10. 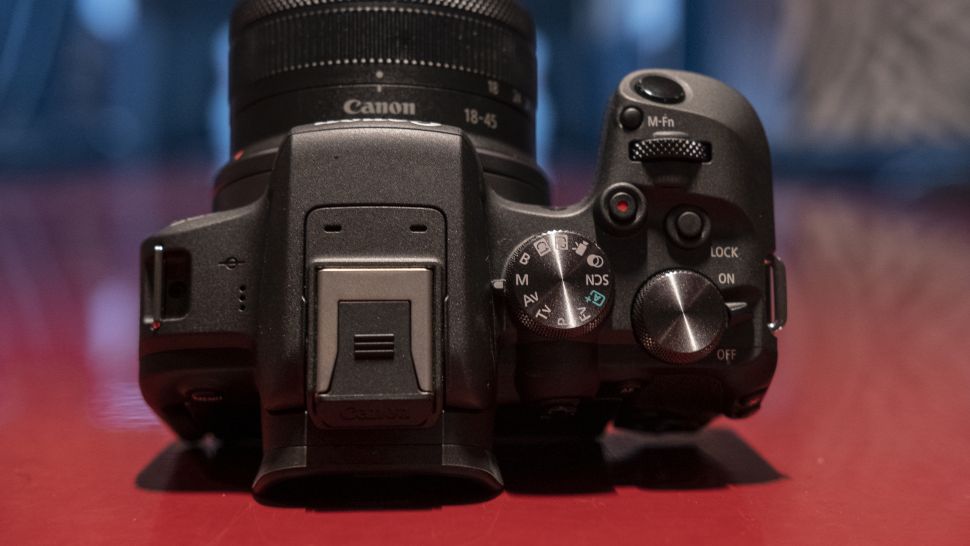 On top, the Canon EOS R10 again looks like a Rebel SL3 / EOS 250D, with a mode dial joined by front and rear command dials, a multi-function button and a video record button. One useful addition, though, is the inclusion of Canon’s multi-function accessory shoe, which can both power and send data to accessories like shotgun mics. Considering this is a feature you don’t even get on the full-frame cameras like the EOS R6, it’s another reason to feel smug about owning an R10.

Around the back, it’s a similar setup to the pricier Canon EOS R7. There’s a fully articulating touchscreen that can flip forwards for video shooters and, helpfully, an AF joystick. This is a feature that affordable cameras often jettison in the name of simplicity, but it’s a real boon for photographers who are looking to quickly move AF points. And that’s likely to be the case when you have a powerful autofocus system with 651 AF points, like on the R10.

One another impressive design feature of the Canon EOS R10 is that it has a very similar 2.36-million dot EVF to the pricier EOS R7, albeit one with a slightly smaller magnification (0.95x, compared to the 1.15x one on its stablemate). On the EOS R7, this is a slightly disappointing viewfinder for its price tag, but it’s a pretty decent EVF for a camera like the EOS R10. 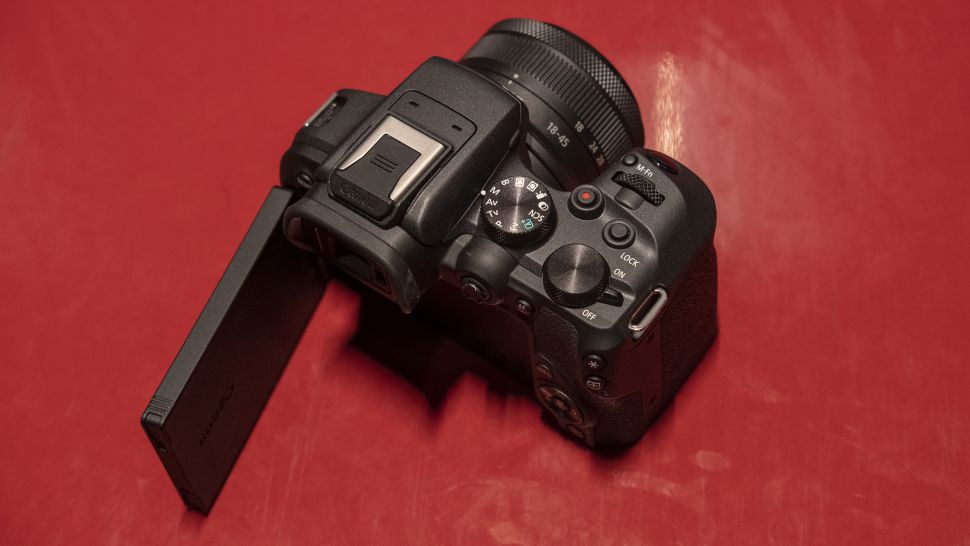 Naturally, there are a couple of design downers on this cheaper model. The EOS R10 lacks the weather-proofing you get on the EOS R7, which means you’ll need to look after it that little bit more. There’s also only one UHS-II card slot, rather than two. And while the EOS R10 does have a microphone input, you also lose the headphone jack for monitoring your audio when shooting videos.

All in all, though, we enjoyed shooting with the Canon EOS R10 during our brief time with the camera. Like the Nikon Z50, it has a pretty deep grip for such a small camera, which means you can pair it with relatively long lenses if needed. But it’s also a neat, lightweight little bundle when combined with primes like the RF 50mm f/1.8 STM lens.

Like the Canon EOS R7, one of the most appealing things about the EOS R10 is its combination of modern autofocus smarts and pretty rapid burst-shooting speeds. The R10 isn’t quite in the same category as the R7 for the latter, but it’s still an improvement on mid-range DSLRs like the Canon EOS 80D and even the EOS 90D.

The R10’s maximum burst speed is 15fps with the mechanical shutter, although that comes with some caveats. Firstly, it can only maintain the speed for 29 raw images, so less than two seconds before it starts to stutter. Also, these speeds are dependent on factors like the conditions, your SD card and the remaining battery life, so we’ll need to test those out more in the real world. Still, it does promise to keep that top speed up for an impressive 460 JPEGs. 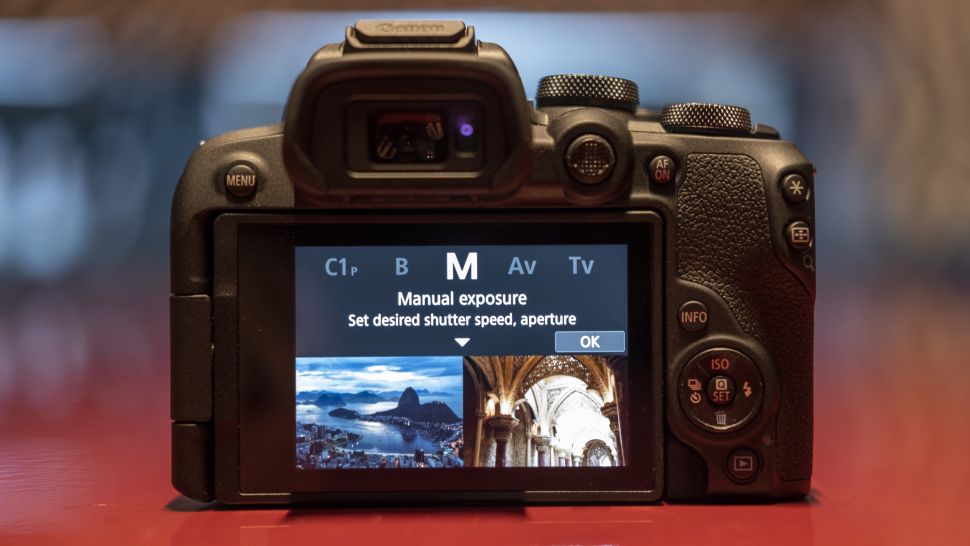 You can get faster 23fps speeds when switching to the electronic shutter, though this is likely to be a last resort. We haven’t yet spent long enough with the R10 yet to see how pronounced its rolling shutter is when using the electronic shutter. And it can only maintain those speeds for 70 JPEGs (so just over three seconds) and 21 raw photos (around one second).

That mechanical shutter performance is certainly promising for a camera of this size and price, though it’s all a bit moot if the autofocus can’t keep up. Fortunately, that isn’t the case on the EOS R10, thanks to the inclusion of a Digic X processor and Canon’s later Dual Pixel CMOS AF II system. 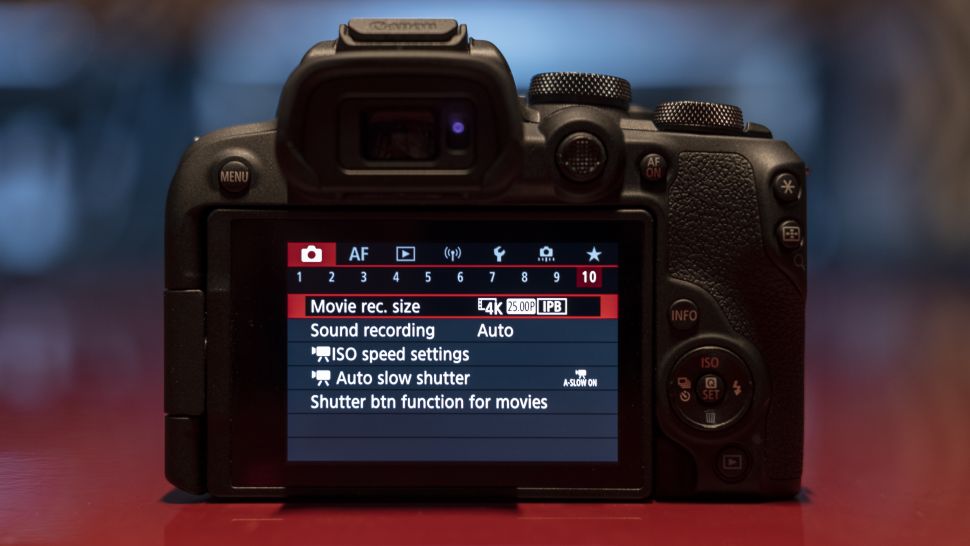 While you can’t expect EOS R5-rivaling performance (Digic X processors are, after all, a family of chips that vary depending on the camera), the R10 does certainly has impressive AF smarts for its price. Dual Pixel CMOS AF II covers pretty much all of the frame (or at least 90% of it horizontally, when you’re picking the AF point) and can track a wide range of subjects. These include people, animals (dogs, cats, birds) and vehicles, too. For the first two, you get Face and Eye AF if they’re visible in the frame, or head-tracking if they aren’t.

A word of warning, though: autofocus systems can vary quite significantly between models, despite looking the same on paper. And we haven’t yet spent long enough with the R10 to fully judge how tenacious and sticky it is. But our early experiments in following ice skaters were certainly promising and, in better light, it should perform even better.

It’s a shame, if understandable, that the R10 lacks in-body image stabilization, but one other area where it draws level with the EOS R7 is battery life. It can apparently keep going for around 500 shots when you’re using the electronic viewfinder, which is pretty decent for a mirrorless camera, albeit well short of a DSLR’s stamina.

Our time with the Canon EOS R10 at an indoor ice rink was too brief for us to fully gauge its image or video quality, but we’ve come away with a few early impressions.

Firstly, this won’t be a camera that’s naturally at home in low-light situations, particularly compared with some of the EOS R system’s full-frame models. The EOS R10’s 24.2MP APS-C sensor is likely similar to the one seen in older cameras like the EOS 80D, which wasn’t renowned for its high ISO performance.

Still, Canon told us that the sensors in the EOS R10 (and EOS R7) “do share some components with existing sensors, but have been redesigned with new microlenses and circuitry”. We won’t be making any final judgements yet, then, but the addition of in-body image stabilization would certainly have helped when it comes to preserving image quality in low light. 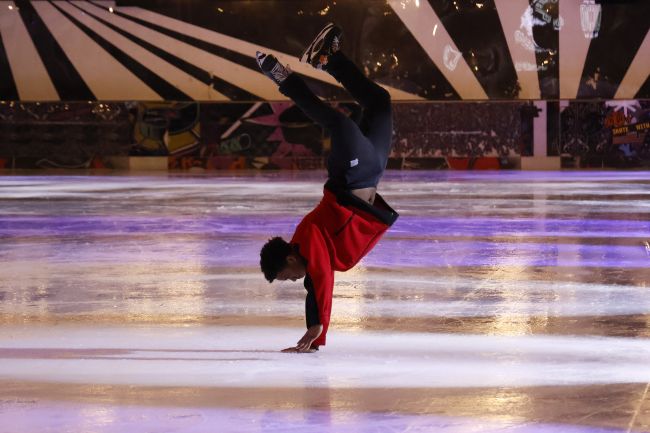 On the plus side, the EOS R10’s resolution is about right for its target audience, who likely won’t be doing as much post-production like cropping as EOS R7 owners. And it should be capable of shooting some pretty decent 4K/30p video, which is oversampled from the sensor’s 6K resolution.

For a camera of this kind, features like autofocus and burst speeds are also arguably as important as outright image quality or resolution, and in our brief time with it the EOS R10 certainly seemed pretty solid in both of those departments.

The Canon EOS R10 is shaping up to be a powerful little mirrorless camera for an impressively low price tag. A few years ago, those characteristics would have given it a strong chance of being a sure-fire hit, but the question now is exactly how big that market is in the age of the incredible phone cameras. 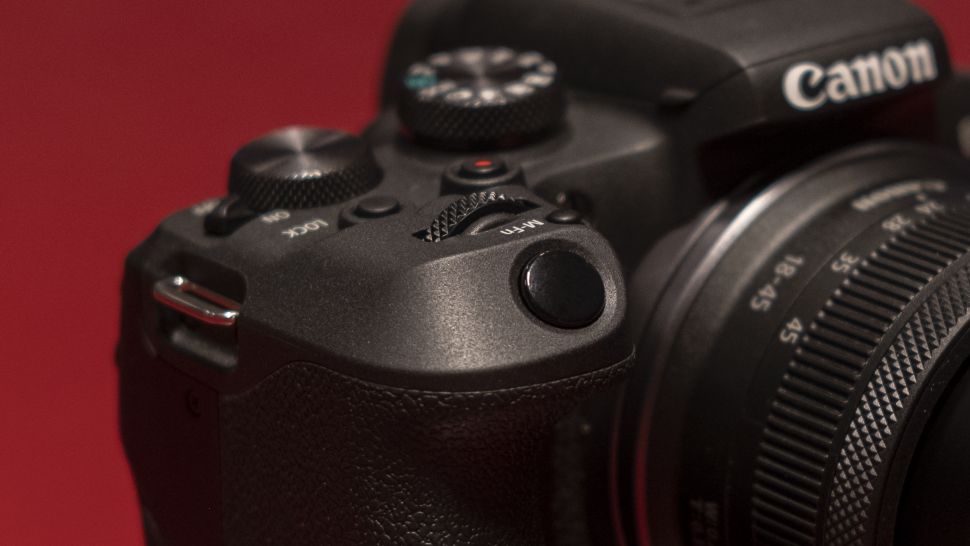 With its emphasis on powerful autofocus skills and burst-shooting, along with its compatibility with RF lenses, the EOS R10 certainly plays to the strengths of Canon’s mirrorless cameras. And those features, combined with its comfortably familiar handling, could mean its most common home is as a smaller, second camera for those who already own an EOS R body.

The EOS R10 certainly doesn’t reinvent small, affordable cameras, but it does bring a level of performance to the APS-C space that we haven’t really seen recently from the likes of Sony and Nikon. And if the R10’s autofocus performance and image quality live up to its promise, it could well be the little, hobbyist-friendly star that’s been missing from Canon’s EOS R system.