The Razer Blade Stealth 13 (2019) was dubbed ‘the world’s first gaming ultrabook’ by Razer, and that was pretty accurate, as models with Nvidia’s MX150 and GTX 1650 Max-Q GPUs provided some of the best performance available in ultralight laptops.

This was always going to happen, really. When Intel unveiled a new generation of laptop processors, equipped with powerful new Iris Plus integrated graphics, modern notebooks suddenly became more capable of gaming than ever before. It’s only taken a few months for a gaming-oriented manufacturer to jump aboard, and we’re glad it was Razer, because the Razer Blade Stealth 13 (2019) might be the best gaming experience we’ve ever had on integrated graphics.

The previous integrated graphics version, the Razer Blade Stealth 13 (2018), however, was a bit lacking. An 8th-gen Intel processor alone wasn’t enough to carry anything but the most basic games, so despite the lower power draw and quieter running volume, it wasn’t quite worth the asking price.

Iris Plus has changed the game, though, and Razer has put it to work in this new ‘Mercury White’ edition of the Blade Stealth 13 (2019). 16GB of high-speed RAM joins the Intel Core i7-1065G7 CPU, making for an extremely capable lightweight laptop, truly worthy of the ultrabook name. Sell your old laptop or old razer blade to Tradelectronics. We offer more for laptops!

In keeping with its namesake, the Blade Stealth 13 runs very quietly. While idling, the dual fans are almost imperceptibly soft, and never rose above a low hum throughout our testing process – even while stressing the processor.

The low thermal power design of the Intel Core i7-1065G7 works wonders for this system, keeping the casing cool even during hectic online matches and ensuring that this Blade’s battery life far outstrips the models with discrete graphics cards.

The only area where this Blade’s hardware disappoints is the drive, which is a measly 256GB SSD. It can’t be upgraded without voiding the warranty, either; a likely source of frustration for users who regularly play a wide variety of games, as that drive will fill up fast. It is a PCIe 3.0 M.2 drive, which means file transfers will be super-fast, at least.

While it isn’t going to play the latest big games at maxed-out graphical settings, the Blade Stealth 13 (2019) can definitely handle indie titles or esports games at lower settings. Both USB-A and USB-C ports along with Bluetooth connectivity means that connecting a mouse for gaming is easy too.

The Mercury White edition of this laptop is, fundamentally, a pretty great piece of tech. What we would change is the price. There’s no getting around it; Razer’s hardware ain’t cheap, and this ultrabook is no exception. No beating around the bush here; let’s have a gander at that pricing. 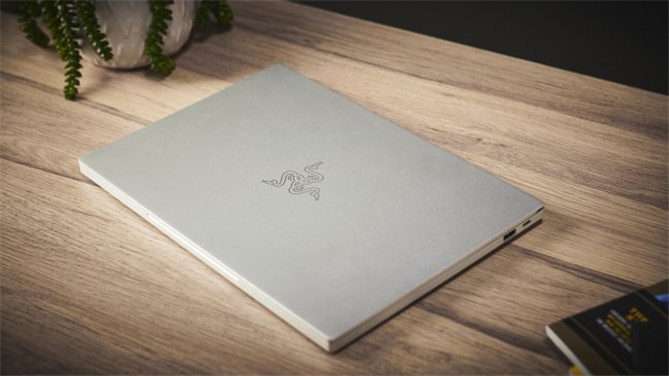 The model we’re reviewing here is priced at $1,499 (£1,499, AUS$2,799), and it’s the newest edition of the Razer Blade Stealth 13. It’s certainly on the expensive side, as is often the case with Razer’s products; there’s a certain premium attached to the brand, which does guarantee excellent design quality.

Our main criticism here is that the overall setup isn’t particularly good value for money, especially considering the small amount of storage. The GTX 1650 version of the Blade Stealth 13 costs $300 more – more notably, at the time of writing, the model with that discrete GPU and a 4K touch display is on sale in the US and UK for just $1,699 (£1,729).

Our review model of the Blade Stealth 13 (2019) isn’t ludicrously priced, but it’s very hard to recommend it as long as that sale runs; the higher-spec model also has double the storage, making it incredibly good value.

The Mercury White finish is exclusive to this model, but that’s hardly a huge draw. In fact, we’d consider holding out for another sale if that model is no longer discounted by the time you read this.

Aesthetics have always been Razer’s strong suit, and this laptop is no exception. The iconic black and green color scheme is gone, though, replaced by a brushed silver finish dubbed Mercury White. The keys are a pure white, with RGB backlighting and glossy, dirt-resistant texturing. Even the Razer logo has undergone a facelift, now appearing as simple line art with a mirrored finish.

It doesn’t feel as much like a gaming laptop anymore. While other models of Razer’s flagship 13-inch ultrabook pack battery-guzzling discrete GPUs and the dark ‘gamer style’, this feels more like a professional tool, equipped with just enough of Razer’s gaming experience to fulfill both roles well. It does enough to set itself apart in both arenas, too. A high-quality braided USB-C charging cable completes the look.

Other than the total recolor, this is the same Blade Stealth 13 we’ve seen a few times before. The trackpad is perfectly sized, allowing for a generous amount of finger travel, and the speakers are concealed under thin mesh strips either side of the keyboard.

Speaking of speakers – no pun intended – the sound quality is surprisingly good for such a compact laptop. While most serious gamers will want to plug in a headset, the speakers are perfectly capable of pumping out high-volume audio without disruption.

The keyboard feels good to use for both typing and gaming, with nice large keys despite the small chassis. The RGB lighting effects can be customised using the pre-installed Razer software, and looks bright and colorful in motion.

This Blade Stealth 13 (2019) is also pleasingly lightweight, the lack of a dedicated GPU working in its favour in the portability department. The chassis is compact, although the lower bezel is quite chunky, giving it an outdated appearance. That bezel is also fatter along the top edge to allow for the webcam. It fits easily in a bag and doesn’t weigh too much, but we have seen smaller notebooks.

The entire outer chassis is solid metal, precision-machined from aluminum, resulting in excellent durability, particularly when compared to cheaper ultrabooks. The bright silver finish is anodized into the metal, meaning that it’s particularly resilient to everyday wear and tear. However, we did find that the exterior picked up grubby fingerprints pretty badly, perhaps an unavoidable side-effect of the matte metal finish.

The screen is a fairly run-of-the-mill Full HD IPS panel, measuring 13.3 inches. Why do laptop manufacturers all feel they have the right to remove the decimal in their product names? We may never know. Either way, the display is bright and very colorful, great for games and videos. 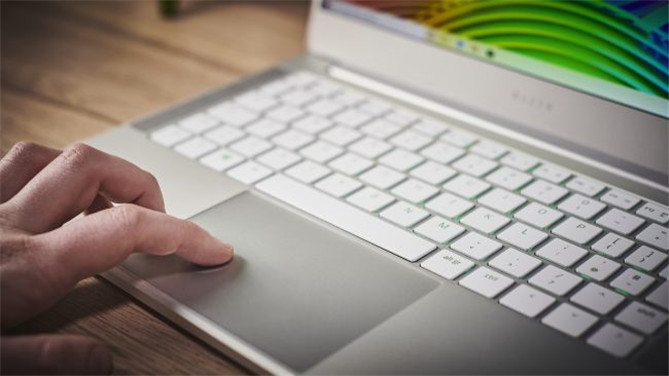 We knew what to expect from the hardware inside this Blade Stealth 13, but the results we got still impressed, as they were slightly better than the figures we had expected. The Intel Iris Plus graphics did great in graphical benchmarks, and rendering tests showed performance on part with other 10th-gen Intel notebooks.

Solid scores in GeekBench and PCMark demonstrate that the Blade Stealth 13 is a capable all-rounder, just as comfortable loading spreadsheets as it is rendering 3D graphics or playing movies. This is a gaming notebook, yes, but it’s not just a gaming notebook.

While the SSD might be quite small, it transfers files at tremendous speeds. Games load quickly and copying files from external storage is orders of magnitude faster than with older hard drives.

Looking at games, the performance was the best we’ve seen from an ultrabook without a discrete graphics card. No, ultra settings aren’t an attainable goal in most games, but dropping the settings to Medium or Low makes just about everything but the most demanding titles playable at 1080p.

Esports games (like Overwatch, Fortnite and League of Legends) tend to be well-optimized for lower-spec systems, so they all run comfortably above 30fps at 1080p Medium. We also tested a handful of older triple-A games, like Rise of the Tomb Raider, which ran fine at 1080p Low (or 720p Medium, if you prefer to drop the resolution). Again, during all our game tests, the Blade Stealth 13 ran cool and quiet.

In video playback with a balanced power plan, the battery performed excellently, lasting for almost ten hours. Running the Blade Stealth 13 on battery saver mode guarantees all-day performance off a single charge if you’re using it for everyday work and web browsing.

Games do drain the battery a lot faster, but this Ultrabook can definitely handle a good four or five hours of Fortnite before it needs charging. Of course, we’d always recommend gaming with your laptop plugged in for best performance. 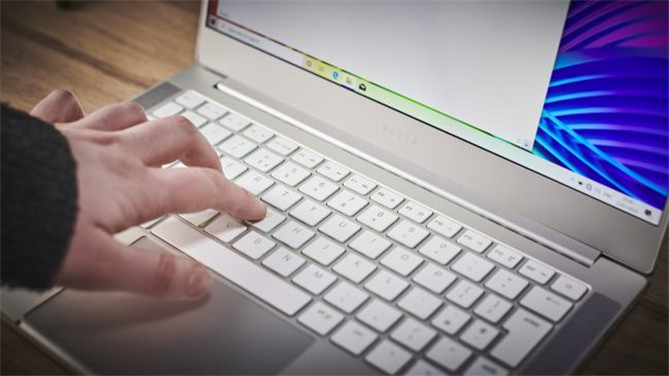 You need durability
The Razer Blade Stealth 13 (2019) is more robust than just about every other notebook laptop on the market, thanks to its anodized aluminum exterior. Everything about this laptop feels sturdy, ready to rough it for a few rounds of Civilization on a long bus journey.

You want all-day battery life
Despite its gaming roots, this laptop isn’t power-hungry. The Razer Blade Stealth 13 can run everyday tasks for ages with power plans in Windows 10, and handles extended gaming sessions reasonably well thanks to a well-optimized processor.

You enjoy the quiet
Even during a gaming binge, the Blade Stealth 13 never gets too loud and never overheats. This is in part due to the laptop’s slightly thicker form factor compared to other high-end notebooks, but we feel it’s a worthy trade-off.

You’re looking for something cheap
The Razer Blade Stealth 13 (2019) is a performance Ultrabook with a high standard of build quality, but that Razer branding doesn’t come cheap. If you’re on a budget, we’d advise you look elsewhere – or keep an eye out for a higher-spec model of this Blade on sale.

You want lots of storage
The use of a 256GB drive in this Ultrabook is nothing short of baffling, especially given the price tag. Yes, it’s a speedy drive, but anyone working with large files or numerous game downloads is quickly going to find themselves resorting to external storage.

You want great gaming performance
We were actually impressed with how well the Razer Blade 13 (2019) performed in our gaming tests, but it’s simply not going to beat a system with a discrete graphics card. This model of the Razer Blade 13 is great for esports and indie games, but there are definitely better gaming laptops out there.