Apple’s long-awaited location-tracking device, AirTag has finally been made official, and while it may be small, it’s likely to prove invaluable if you’re a serial loser of keys, wallets, and the like.

As well as emitting an electronic beep when you can’t locate a tagged item, if an AirTag is paired with an iPhone 11 or above you can get accurate directions to the item using the Find My app. Called Precision Finding, the feature utilizes the iPhone’s accelerometer, camera, and gyroscope to provide on-screen directions, your current distance from the AirTag, and haptic feedback when you get close to locating it.

Apple’s Find My device network can also be harnessed to help reunite you with an AirTag that you deem lost rather than misplaced: just put the AirTag into Lost mode, and if another device in the network passes by the AirTag, you’ll get an anonymous update on its location. You can also assign a phone number to a lost AirTag, so if it’s found by a member of the public they can tap it using their iPhone or any NFC-enabled device to display the phone number and get in touch with you.

Apple has also put a lot of thought into privacy, and has put several measures in place to ensure that AirTags can’t be misused. This means you can’t activate an AirTag on behalf of someone else, and your iPhone, iPad or other iOS devices can identify if an unknown AirTag is travelling around with you, alerting you that the owner can see your location. On top of that, the AirTag will draw attention to itself by playing a sound if it’s been separated from its owner for a long period of time but still moves location.

If someone borrows an item of yours to which an AirTag is attached, and they’re getting an unknown AirTag alert, they can choose to pause these alerts for a day, or indefinitely if the AirTag is registered to an Apple ID that’s a member of your family sharing group.

The disc-shaped tracker can be slipped into a wallet or bag, but if you want to attach it to keys or other items you’ll have to purchase an optional key fob or loop that it slots into; however, these will set you back the same price, and in some cases more, than the AirTag itself, meaning an AirTag certainly isn’t the most affordable location tracker on the market. And, like many Apple products, it only works with iOS devices.

However, if you’re regularly forgetting where you left your keys or wallet, or just want the peace of mind that you could quickly find a misplaced item, then an AirTag will be a sensible purchase. 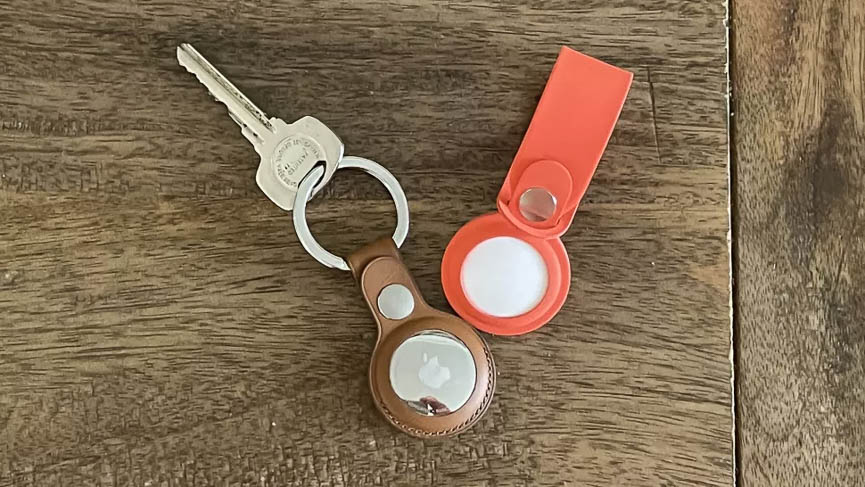 As mentioned, if you want to attach an AirTag to keys, bikes or other items you’ll need to purchase an optional key fob or loop – these come in silicone or leather, with prices starting from $29 / £29 / AU$45.

Third-party brand Belkin makes a couple of officially licensed AirTag holders that are available alongside Apple’s own accessories at the Apple and which cost a bit less, and we expect to soon see more third-party accessories appearing on Amazon and elsewhere. 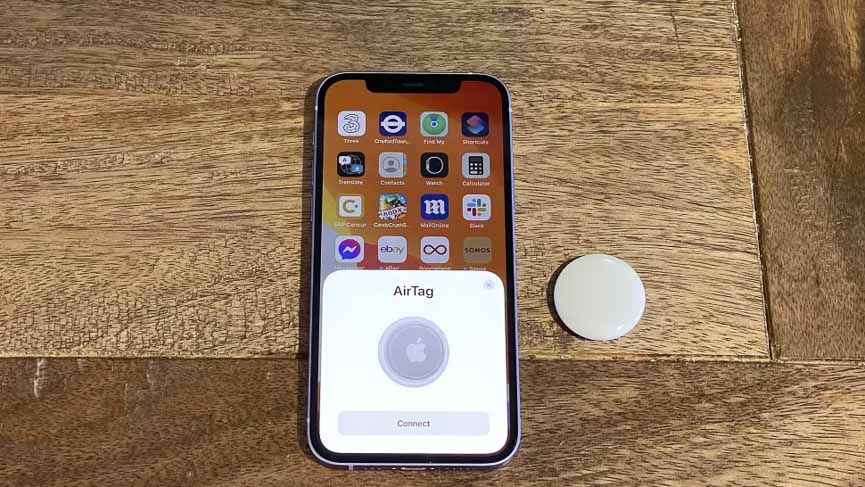 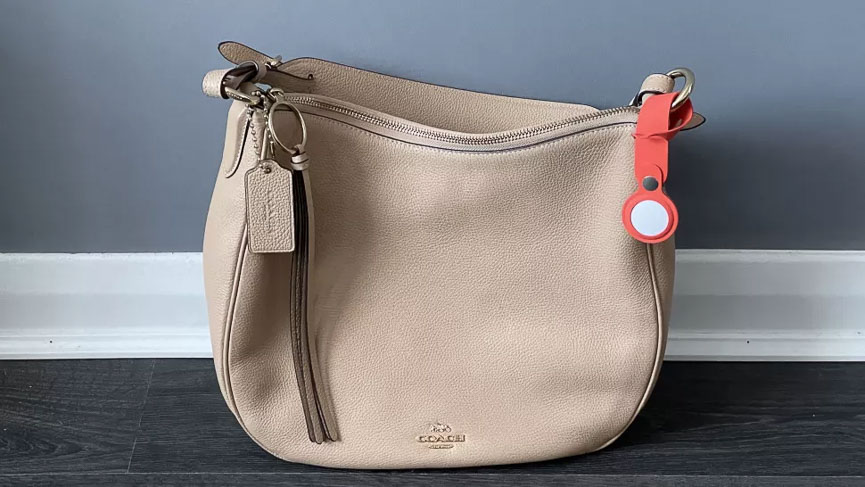 Like most iPhone accessories, the AirTag proved extremely simple to set up. Once we’d removed the packaging, the AirTag emitted a short beep, and was immediately recognized by our iPhone. We were able to assign a name to the AirTag, and it was assigned to our Apple ID, showing up in the Items tab. It was also very simple to slip the AirTag into the leather key fob and loop accessories, enabling us to attach them to our keys, and the strap of a bag.

Tapping the AirTag from the items list in the Find My app brings up several options, including Play Sound. We found that it took a few seconds for Find My to connect to the AirTag and emit three cycles of five electronic beeps, which registered 64db on our sound meter – loud enough that we could hear it from beneath the pile of cushions under which we’d buried it on the sofa.

The short cycle of electronic beeps lasts just seven seconds, which is long enough to locate something in the same room or the one next to it, but didn’t suffice when we were upstairs and our ‘misplaced’ item was downstairs. In this instance, we had to tap the Play Sound option four times before we were able to get close enough to the AirTag to hear it.

This is where the Precision Finding feature can help. This uses Ultra Wideband radio technology to identify the distance and direction your iPhone is from the AirTag, and display this information on-screen and through haptic feedback to help you locate the AirTag.

On the whole, we found that the on-screen distance, which is displayed in feet or meters, and the directions, did make it faster to find our (deliberately hidden) AirTag. However, our tests were conducted in a home with cavity walls, which often affects the reliability of Bluetooth connections between devices such as headphones and smartphones, and we found this to be the case with the Precision Finding feature, too.

For example, when we left the AirTag in the garden and moved inside, our iPhone 12 initially failed to establish a connection with the AirTag and asked us to move to a different location. As we moved closer, it managed to connect to the AirTag but the Signal was weak. It eventually connected to the AirTag when it was 21ft / 6 meters away.

When we placed the AirTag in our front garden and walked across the street until we were 30ft / 9 meters away, our iPhone formed a connection with the AirTag almost instantly and was able to guide us to it, without losing signal.

As we’ve already mentioned, if you’re out of Bluetooth range of the AirTag, Apple’s Find My device network can help identify the location of your Key Finder. We found when we left the AirTag in a busy town center and returned home, making it as lost, it took just 30 minutes for a passing iPhone to update us on the AirTag’s location.

We were also able to ask Siri to find an AirTag, which started the cycle of short electronic beeps, but to use Precision Finding, Siri prompted us to open the Find My app.

Apple’s AirTag is powered by a CR2032 battery, and Apple says it will last more than a year before it needs replacing – that’s based on causing the tracker to emit a sound four times a day, and one instance of using Precision Finding per day.

We can’t yet test these claims of course, and there’s no battery level indicator, so we weren’t able to gauge just how much our heavy testing depleted the battery.

The battery is easy to replace: you hold the AirTag with the colored side down, place two fingers on the metal side and twist to the right to pop off the metal cover, exposing the battery.

Should I buy an Apple AirTag?

You want clear directions to misplaced items
The Precision Finding feature makes it far easier to locate misplaced items than just listening for the sound of the AirTag, thanks to the on-screen directions and distance countdown, and it’s currently the only location tracker on the market that offers such a feature

You’re concerned about privacy
Apple has embedded several privacy features into AirTags to ensure they can’t be misused; from having your iPhone or iPad alert you if an unknown AirTag is travelling around with you, to ensuring that you can’t set up an AirTag on behalf of anyone else.

You want to personalize the look
With compatible loops and key fobs available in a range of colors and finishes, including leather and silicone, you can very easily customize the look of an AirTag to suit what outfit or accessories.

You’re on a budget
At $29 / £29 / AU$45, the AirTag is similarly priced to other location trackers on the market, but if you want to attach them to keys, bags or anything else you’ll need to purchase an optional strap or keyfob, which in the case of Apple’s own accessories carries the same or a higher price tag, making these an expensive means of reuniting yourself with misplaced items.

You have an Android device
There’s no way of setting up and using an AirTag with an Android smartphone or tablet, so if you don’t have an iOS device, then AirTags aren’t for you.

You want to share your location tracker
Being able to give a family member access to a location tracker can definitely help speed up tracking down your misplaced item, especially if you think it’s still at home and someone else can check for you. However, that’s not something AirTags offer, unlike rival Tile.