The Acer Nitro 5 (2022) is an excellent option for anyone looking for a budget gaming laptop, considering how the current market demand for more affordable gaming PCs and laptops has soared in recent months.

For the most part, the Nitro 5 is one of the best cheap gaming laptops around thanks to its great performance, offering a well-rounded gaming experience for its price point. In terms of specs, the Acer Nitro 5 sports some beefy specs for a budget machine, which means it runs most games at 30 FPS at least with maxed-out settings and much higher under more reasonable settings.

The screen is a 15.6-inch display with thin bezels to maximize the space but unfortunately no anti-glare, which means it’ll be that much harder to game when you’re outside in direct sunlight. The keyboard is simple but smooth and easy to use, with wide keys and a tenkey numpad on the right side. It’s also backlit for easy gaming in the dark or dimmer lighting. The touchpad is also smooth and very responsive with no noticeable input delays.

The chassis feels solid and well-built and while it’s not thin and lightweight by any stretch of the imagination, it’s still lighter than many other bulkier gaming laptops and relatively easy to carry around. It’s also well ventilated, using a dual-fan and four-exhaust setup to keep the temperatures low.

Its battery life is easily the worst feature, as it runs out of power in about four hours with regular, non-gaming use. The cable it comes with is a very slow charge, so you’ll have to splurge for a fast charging one yourself to take advantage of the built in Thunderbolt 4 support. The second worst is the 720p webcam with an average-at-best clarity, but unlike some other budget laptops you at least have one built in.

It supports Wi-Fi 6E, which means a much faster internet connection whether at home or on the go. This is a great option for streaming games when you can’t tether your laptop, though it does hinge on whether the Wifi used supports it.

The Acer Nitro 5 is a well-rounded gaming laptop that has some solid performance falling right in line with its competition, except when it comes to its below average battery life. Though not the sexiest, it’s fairly portable with a large screen size and very affordable as well, which is a definitely a bonus nowadays. 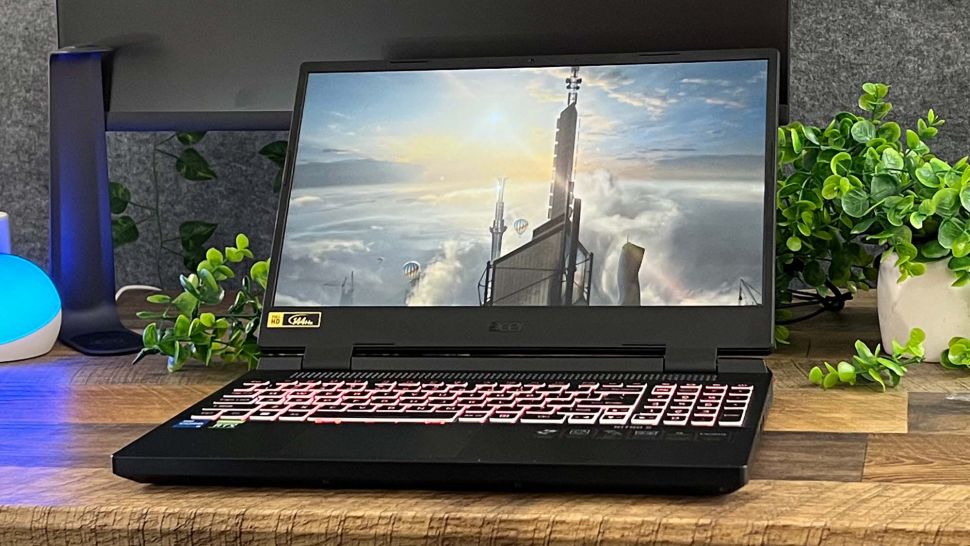 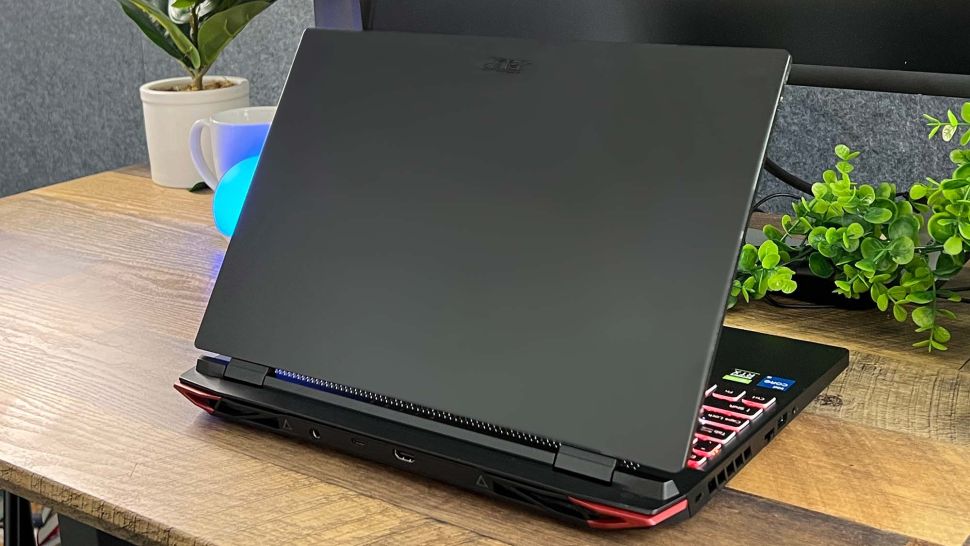 When you think of the best gaming laptops, the first thing that pops in your head might be one on the thicker side, with a simple black metal exterior, and a bezel that’s thin but nothing out of the ordinary. In other words, a fully functional design that does little to stand out. And the Acer Nitro 5 fits that to a T.

It has a sturdy and high quality build that’s fitting for a gaming computer. It has a good amount of heft to it, so you’ll definitely feel its weight if you carry it around with you, but its size isn’t excessive enough to cause genuine stress either. As long as you have a good quality laptop bag with some decent space, it doesn’t take up too much room and won’t overburden you either.

If there’s anything about the Acer Nitro 5 that stands out, it’s the keyboard. The keys are black with a white outline, lay mostly flat, and are wider than a standard keyboard’s keys. This gives it a very distinctive look that may be visually polarizing but serves a more practical purpose, which is to make typing on them much easier for those who have thicker fingers or generally shaky hands. 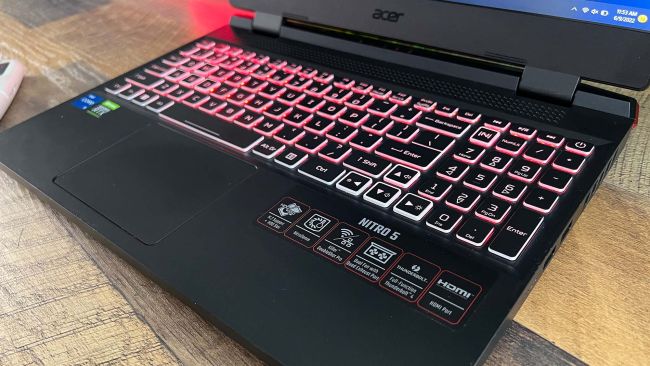 The smooth and flat surface also means it’s easier for fingers to glide from key to key, which is extremely important when in an intense gaming session that requires fast input. There’s also a numlock pad on the right, putting number keys in an easy to reach position.

The thin bezels are somewhat notable, as they help to maximize the screen real estate while also preventing the screen itself from having to increase in size and make the whole laptop larger and clunkier.

Its port selection is standard but in a good way, with a nice variety of ports and slots to suit most needs. There are three USB 3.2 Gen 2 Type-As and one Type-C, an HDMI port, an SD Card Reader, a headphones jack, and a Kensington Slot for added security. It also comes with a Thunderbolt 4 port, which is excellent for fast charging though you’ll have to purchase the cable yourself. 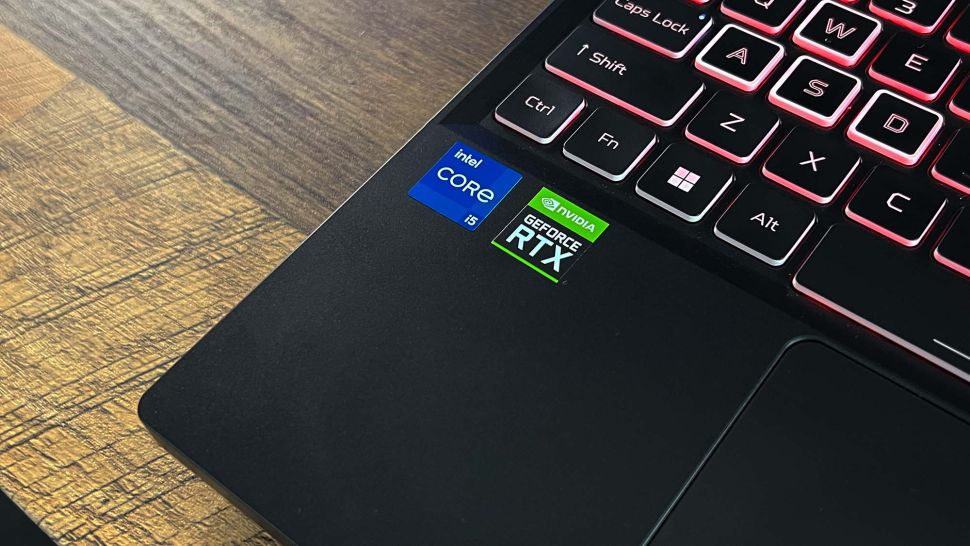 One of the most important yet underrated features of any gaming laptop is the circulation. No matter how cutting edge the specs are, if the airflow is terrible your PC is heading down to crash town. But the Acer Nitro 5 has a solid setup which includes dual-fan cooling, quad exhausts located on each side, and even an upper air intake situated above the keyboard. This translates to a very well cooled machine that hasn’t overheated in the countless hours I played around with it.

Here is how the Acer Nitro 5performed in our suite of benchmark tests:

In terms of performance during a gaming session, it runs most graphically demanding titles pretty smoothly. We tested it using both Total War: Warhammer III and Cyberpunk 2077 and without any of the magic of ray-tracing and integrated graphics, both games are able to maintain about 30-50 FPS in Ultra settings and between 70-130 FPS in Low settings. And considering that this laptop’s benchmarks are actually a bit higher than two of the other budget competitors, it makes sense that it’s able to hold its own.

Complementing the visuals is a competent sound setup made of dual 2W speakers. While not groundbreaking in any way, the music and sound effects are immersive and support the graphics well. The keyboard is smooth, responsive, and feels satisfying to use; not to mention the red backlight is always a nice touch, especially during late night gaming sessions.

Also complementing the visuals is the 15.6-inch QHD screen, with a resolution of 2560 X1440. This is further supported by the 165Hz refresh rate and 3ms response time, meaning that not only do the graphics look nice but the visuals are crisp and smooth.

The webcam is nothing to write home about, as it’s a substandard 720p resolution that looks okay but not super crisp and clear. It’s good for Zoom meetings and will manage during streams, but don’t expect anything polished either.

All around this laptop performs pretty well for a budget machine, passing nearly every benchmark handedly. Framerate is better than you’d expect from the hardware it has, which is no doubt the CPU carrying its full weight. It has a great circulation setup, which no doubt contributes to its overall performance, and the sound supports the visuals perfectly with no breakups or other quality issues. 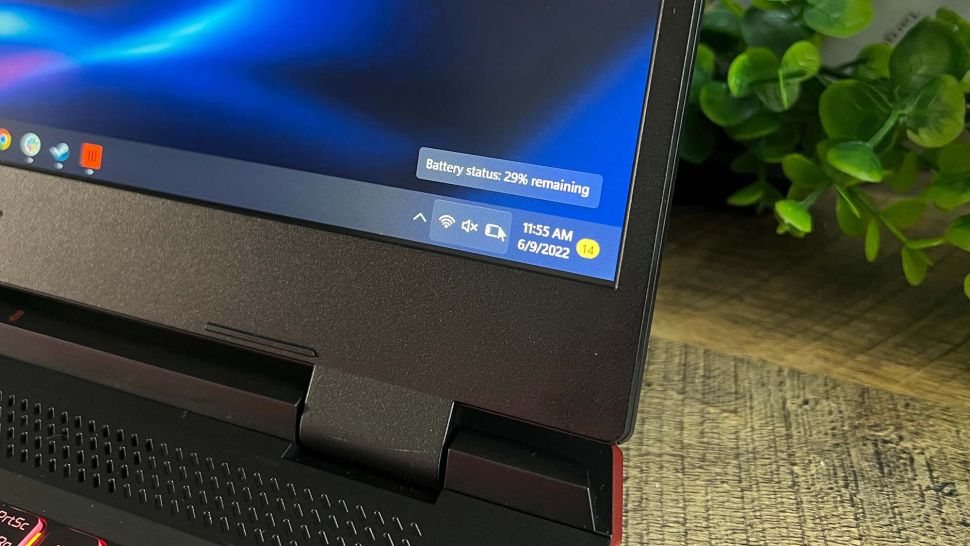 If there’s one thing that weighs down the Acer Nitro 5 and it’s the abysmal battery life. Even under normal working conditions the battery can’t seem to go past a few hours before needing a recharge, and the charge time itself is rather slow. Do yourself a favor and buy a Thunderbolt 4 charger instead.

When we ran a standard 1080p movie test, which involves looping a movie at normal settings until the battery life runs out, the battery didn’t even make it to the four hour mark before dying. The results of the PC Mark 10 Battery Life benchmark were a bit more surprising, as the laptop matched its two competitors pretty closely with its score of 6536. This is despite the other two laptops having a battery life of at least eight hours. 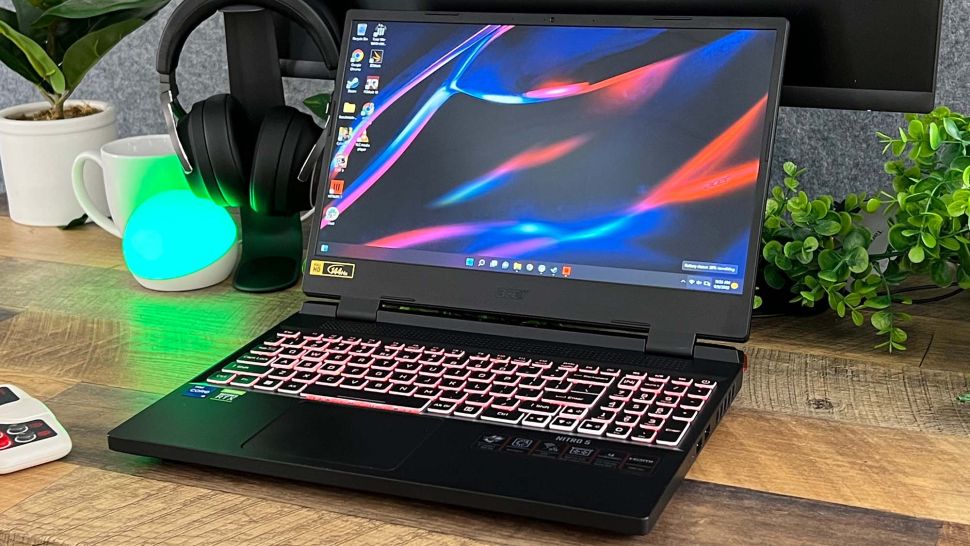 You’re on a strict budget
The price range alone is a great reason to purchase, as most of its options are at or below $1000. The hardware keeps the price cheap, yet still squeezes out a very respectable performance that’s sure to keep up with most videogames.

You want a laptop with solid performance
This laptop performs well on most titles, and is even able to maintain at least 30 FPS consistently even without integrated graphics on. Not to mention the monitor boasts a very good refresh rate, and the laptop overall has up to a 3ms response time. It even features ray-tracing capabilities.

You want a laptop with a good battery life
This is the weakest aspect of the laptop, with a battery life that barely lasts four hours and takes a long time to charge if using the default adaptor and charging port. If you want a decent charge, you’ll best off investing in a Thunderbolt 4 charger instead, which it thankfully supports.

You’re looking for a pretty machine
To be blunt, this laptop is built to be sturdy and practical, not to be pretty and flashy. While this falls in line with being a budget laptop, if you’re looking for anything that’s not a solid black laptop with no frills, you’ll most likely have to pay extra for one that’s more visually appealing.